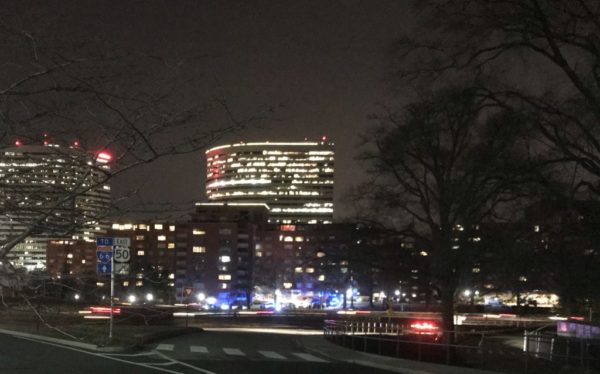 Residents of the River Place apartment complex in Rosslyn were startled by a noisy arrest by Arlington Police last night (Thursday).

County police spokeswoman Ashley Savage says officers served a warrant for a suspect in the 1011 block of Arlington Boulevard around 6 p.m. and took the person “into custody without incident.”

“The criminal investigation is ongoing and there is no ongoing threat to the community related to this incident,” Savage told ARLnow.

However, ARLnow readers reported hearing loud bangs at the time of arrest, and saw at least a dozen police in tactical gear on the property, which sits near the intersection of Wilson Blvd and Route 50.

One reader even mentioned seeing a car “pinned in by some old junker cars and police vehicles in the parking lot” of the apartment complex.

Savage did not offer other details on the arrest.