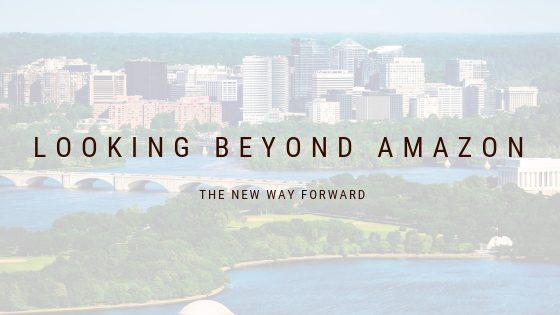 This column is sponsored by BizLaunch, a division of Arlington Economic Development.

By Victor Hoskins, Director at AED.

It has been two months since Amazon announced its plan to bring its major new headquarters to Arlington.

In that time we have been busily planning and answering Arlingtonians’ many questions about the project. However, here at Arlington Economic Development, we are already looking ahead.

What’s next for Arlington’s economic landscape?

The Amazon effect, as it is being called, has been a game-changer for Arlington’s business community. Not only does Amazon’s decision really cement Arlington as a technology leader on the East Coast, the revenue generated from this company in the coming years will go a long way toward restoring stability to Arlington’s office environment, which has suffered from years of high vacancies.

Amazon will gradually reduce the eight million square feet that currently stands vacant in Arlington. Each one percent of vacant office space that we fill yields $3.4 million annually in new local tax revenues– revenues that help to provide resources and amenities valued by our community.

In a time when we all have faced difficult decisions regarding the County budget, this needed revenue comes at the perfect time.

But by no means is this a time to sit on our laurels. It just changes the conversation a little. In addition to putting a dent in Arlington’s office vacancy rate, what Amazon has truly done is put us on the map as a desired location to do business. That is where the real work begins.

The AED team is always working to find the next innovative company that is considering making Arlington its home. We are focusing on diversifying our economic base. We have come a long way in the last four years, but there is still work to be done to ensure Arlington’s place as a leader in the innovation economy.

The Amazon deal did something else that will also help to propel us into the future. That deal set truly unprecedented levels of partnership between jurisdictions and the Commonwealth of Virginia to ensure success, and that partnership around the region is something we only see growing. It is truly a regional economy now, and we need to think that way moving forward.

I look forward to working closely with my colleagues at the Virginia Economic Development Partnership as well as the counties throughout Northern Virginia. In addition, D.C. and Maryland Counties across the river are colleagues I have come to value not just as coworkers, but also as friends.

We have all discovered that by working together, the entire region benefits, and I believe that is the true Way Forward formula that will bring economic success to Arlington.