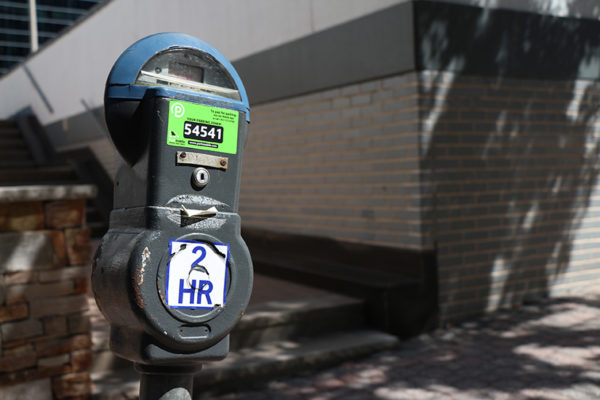 (Updated Friday at 12:45 p.m.) New legislation working its way through the General Assembly could soon let Arlington, and other large Northern Virginia localities, start hiring private contractors to ticket parked cars for minor violations like expired license plates — but the lawmakers backing the bill say they introduced it for a slightly different purpose.

Currently, only county police can hand out such violations. But identical bills just introduced down in Richmond by state Sen. Dick Black (R-13th District) and Del. Karrie Delaney (D-67th District) could allow private parking enforcement staffers in large counties like Arlington to hand out those tickets too — if the localities opt in for the change.

At least, that’s how Arlington County Attorney Steve MacIsaac reads the bill, according to a county spokeswoman. Specifically, he believes that the legislation “would allow Arlington to enforce expired plates and other such violations on parked vehicles, and to hire non-law-enforcement uniformed personnel to carry out such enforcement.”

“It would be up to the County Board, should this bill become state law, to decide whether it wants to take advantage of this broadening of the county’s authority,” Board spokeswoman Mary Curtius told ARLnow.

But the bill’s backers say they introduced the legislation for to make a difference far outside of Arlington. Black and Delaney both represent portions of Loudoun County, where they’re targeting the change.

The legislation specifies that any locality with more than 40,000 residents has the power to hire contracted workers to enforce parking violations, rather than relying on police officers for that purpose. Current law only gives cities with more than 40,000 people that authority, leaving Loudoun and other large counties a bit stuck.

“This bars counties from contracting out enforcement services, forcing members of their already overworked police offices and other uniformed personnel to use their working hours checking parking hours and enforcing parking meters,” Delaney said during a House of Delegates subcommittee meeting last Thursday (Jan. 10).

As Loudoun prepares to welcome its first Metro stations in the coming years, with the Silver Line gradually expanding out to Dulles International Airport, county officials want to hire some extra help to enforce parking around the new stations. Jeffrey Gore, a lobbyist hired to represent Loudoun in the legislature this year, assured the Senate’s transportation committee yesterday (Wednesday) that plenty of other cities have made such a change, without incident.

“It’s not traffic violations, it’s just parking ordinances,” Gore told lawmakers. “Richmond does this, Virginia Beach does this. But Loudoun can’t do this, Fairfax can’t do this.”

But one outspoken political observer in Northern Virginia, political strategist Ben Tribbett, is blasting the bills as a “huge revenue grab” and compares them to another program in Fairfax County meant to step up the enforcement of car registration fee evasion.

Huge revenue grab by the county and another way to target the working poor- which Fairfax is currently going after with the TARGET program. Can't believe this is sponsored by a "Democrat".https://t.co/SZvndVTbtQ

An aide for Delaney did not respond to a request for an interview to discuss her bill, or Tribbett’s criticisms. However, county police spokeswoman Ashley Savage stresses that it wouldn’t have such an impact in Arlington, where police can already enforce such violations on parked cars.

Regardless of those claims, both bills are steadily advancing.

Black’s bill passed the Senate’s transportation committee on an 8-3 vote, and could soon head for a floor vote. Meanwhile, a House transportation subcommittee unanimously voted to advance Delaney’s bill, sending it to the full committee for review.