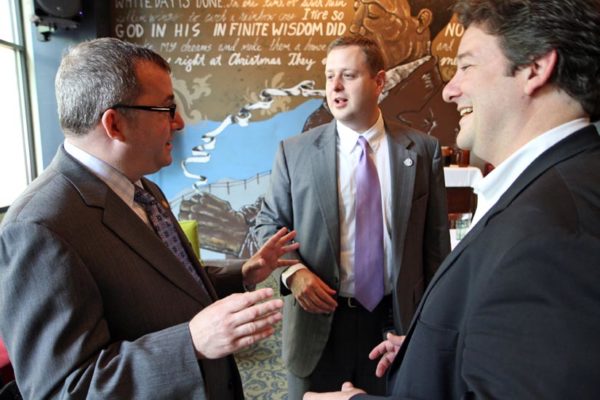 After years facing powerful Republican majorities in both chambers of the General Assembly, Arlington lawmakers are accustomed to harboring only modest ambitions for each legislative session.

But as legislators return to Richmond today (Wednesday), members of the county’s all-Democratic delegation say they’re ready to flex their muscles a bit over the new, 45-day session.

With all 140 lawmakers on the ballot this fall and Democrats just one seat away from seizing power in both the House of Delegates and the state Senate, Arlington legislators sense an opening. Republicans have taken a beating in all manner of elections across the state over the last two years, and Democrats expect that will inform how GOP leaders manage their slim majorities in this session.

Arlington lawmakers hope that will result in some of the party’s more moderate members finally embracing their efforts around everything from redistricting reform to gun violence prevention, in a bid to appear more attractive to swing voters. What it all comes down to for state Sen. Adam Ebbin (D-30th District) is a simple motto for his colleagues across the aisle: “lead, follow or get out of the way.”

“They can can decide to lead on some of the most important issues facing Virginia, which they have failed to do, they can choose to follow Democrats, or they can have voters get them out of the way,” Ebbin told ARLnow. “If they come to the table on a variety of issues, I think their chances are enhanced… But will [House Speaker Kirk Cox] want to allow bills to come to the floor so that a handful of members who want to appear to be moderates vote for them, or even sponsor them? Time will tell.”

Del. Patrick Hope (D-47th District) says he’s “hopeful” that Republicans will pursue such a strategy over the next weeks — not only does he see it as wise political strategy, he jokes that “with my last name, I don’t have a choice” but to be optimistic.

But Del. Mark Levine (D-45th District) takes a gloomier view of the GOP, arguing that Richmond Republicans have done nothing but “march in lockstep” with their leadership for years, and could soon face an electoral price for doing so.

“If moderate Republicans continue to fall in line and do what’s against their constituents’ wishes, we will absolutely run against them for it and they will lose in November,” Levine said. “I see it as a win-win: either we get the policies we want, with majority support, or we get these people out.”

Should Republicans choose to sign onto some Democratic priorities, Arlington legislators see two key areas for agreement: a constitutional amendment establishing a nonpartisan commission to draw district lines, and the ratification of the Equal Rights Amendment.

In both cases, the Democrats expect they’ll have enough votes to pass the bills on the floor — Republicans have either introduced or co-sponsored bills on both subjects — the question is whether the legislation will make it out of committee, where a handful of lawmakers have the power to quickly kill the bills.

Del. Rip Sullivan (D-48th District), a key backer of redistricting reforms, sees a real “sense of urgency” to the aforementioned issue this year, simply due to timing. Democrats hope to pass a constitutional amendment before the next round of redistricting in 2021, and that requires a complex process.

Lawmakers need to pass the amendment twice: once before a legislative election, and once afterward. Then, the matter will head to a statewide ballot referendum, which Sullivan is hoping to line up with the 2020 elections. Should it pass all those hurdles, stripping power from lawmakers to draw their own districts, the new commission would be in place by the time the Census mandates a change in boundary lines.

Considering that Democrats may well take control of the General Assembly this fall, Del. Alfonso Lopez (D-49th District) expects it would be in the best interest of Republicans to agree on a nonpartisan process now while they still can. Levine notes that it doesn’t help the GOP’s chances either that federal courts have ordered a redrawing of some House district lines over claims they were racially gerrymandered, a process that will likely weaken Republican chances in several important seats.

“Not passing something will essentially hand the reins of gerrymandering back to Democrats, and I don’t think that’s what they want,” Lopez said.

Even with this newfound pressure, however, Sullivan says it’s “not clear to me that leadership will even allow a vote” on redistricting or the ERA ratification, which could revive the long-dormant effort to mandate equal rights for women in the U.S. Constitution.

“There’s a lot of momentum behind the ERA, so it will be interesting to see if Republicans, in an election year, will let it come forward for a vote,” Hope said. “And I’m absolutely convinced it will pass if gets to the floor.”

Instead, it seems clear to lawmakers that a debate over tax revenues will prove to be the dominant issue of this legislative session.

The Republican tax reform bill shepherded through Congress in 2017 will result in an extra $1.2 billion in state revenues, and battles lines are already being drawn about how to spend that money. Democratic Gov. Ralph Northam is proposing a mix of tax relief for low- and middle-income families and new investments in everything from education to broadband access; Republicans would rather see all of the money invested in tax breaks for slightly wealthier earners.

“If you think we argue or fight when times are tight, wait until you see the kind of arguing we can do when there’s extra money,” Sullivan said.

Cox and his fellow Republicans claim that Northam’s proposal amounts to a “middle-class tax hike” because it doesn’t send all of the savings generated by the federal tax cut back to middle-income families. But Democrats charge that the GOP’s plan, which centers on households making between $125,000 and $150,000 a year, targets only richer families and leaves the poor behind.

“We really need to encourage those folks working hard in the toughest economic circumstances to make it easier for them to have childcare, to have healthcare,” Ebbin said. “For people working hard, we should help them get ahead. That’s what this country is about.”

Democrats point out that Northam’s proposed investments, which could raise teacher pay across the state and expand select healthcare programs, would provide their own benefits for Virginians across the income spectrum. But Lopez also concedes that the most likely scenario is that the two sides strike a a compromise with “a little bit of both” tax relief and new spending.

With all this uncertainty, however, one thing is for sure — the short session will move awful quickly, especially with elections on the horizon.

“It’s going to go fast, and it’s going to be furious,” Lopez said. “And there are a lot of issues affecting Arlington families that we’re going to try to keep folks updated on.”