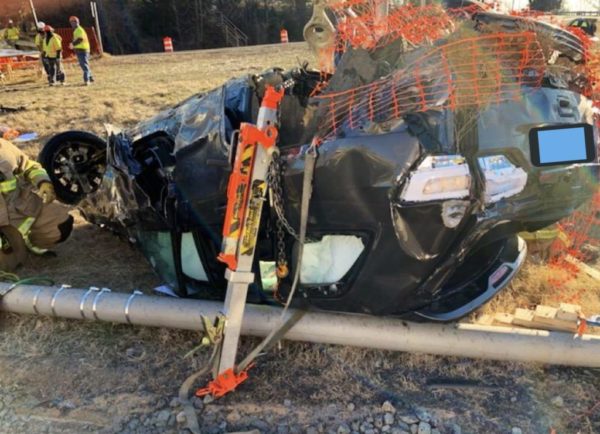 (Updated at 9 p.m.) An SUV crashed and flipped on its roof near Rosslyn this morning, injuring one person.

The crash happened before 9:30 a.m. According to police, the SUV was on I-66, heading toward D.C., when it careened off the side of the highway and landed along Route 110 — near a construction zone where Route 110 splits off to westbound I-66 and Wilson Blvd in Rosslyn.

One person suffered non-life-threatening injuries, according to the Arlington County Fire Department. The northbound lanes of Route 110 were closed for an extended period of time, but reopened shortly before 10:45 a.m.

Crews extricated one patient from this accident on 110NB. Pt transported in Good Condition with NLT injuries. ACFD units returning to service. Continue to seek alt. routes as all lanes RT110 will be closed from Arlington Ridge Rd to Marshall Dr for unknown time pic.twitter.com/3sKmxQDWZf

Police are investigating a single vehicle crash with injuries. At approx 8:30 AM, the driver was traveling on I-66 when he left the roadway and landed on Rt. 110. @ArlingtonVaFD extricated the driver and transported him to an area hospital with non-life threatening injuries. pic.twitter.com/t1inAjqFDS

It was a busy morning for ACFD, which also responded to a call for smoke that filled a one-story commercial building — reported by one witness to be the 7-Eleven store — in Virginia Square.

Electricity controlled, smoke disipating. Most units returning to service. Expect congestion in the area for next 30 minutes as remaining units finish investigation and smoke removal.

Wilson Blvd at Lincoln is entirely shut down right now for fire department response, looks like at the 7-11 @ARLnowDOTcom