The rise of Hazy/Juicy/New England-style IPAs was probably my first “old man yells at cloud” moment as a beer “professional”, or whatever it is I am.

They weren’t bitter, and the “haze for haze’s sake” thing was almost immediately obnoxious to me. It felt like style was trumping substance, not to mention the difficulty in keeping up with the tide of frequent new releases.

The thing that might’ve irked me the most was that I really liked a lot of the beers that kicked off the movement, and have enjoyed many that followed. To name only a few: The Alchemist’s Heady Topper is great, and if anything I enjoy Focal Banger even more.

The Lawson’s Finest Liquids beers I’ve tried have been excellent. I adore Two Roads’ Two Juicy, Solace’s Partly Cloudy and mostly anything Commonwealth Brewing Company puts out, and have been on a recent kick with Fat Orange Cat’s Write Drunk Edit Sober (pictured — how did they know?). 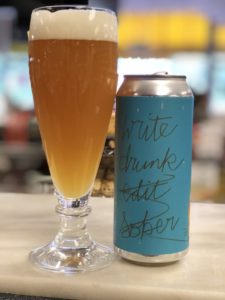 So, as usually happens once I get over myself, I found myself far more open to new takes on the style, and more easily able to discern what I liked/disliked in a Hazy IPA, and whose versions I tended to prefer. Not much of a surprise there.

What did surprise me was something I started noticing before, but especially after I rejoined the staff here at Arrowine: how many wine drinkers were getting into Hazy IPAs.

Actually, the idea coalesced observing our own fearless leader himself, Doug Rosen. Where just a few years ago, you couldn’t pay him to drink the average IPA, now he’d try new Hazy IPA arrivals and note their flavors, and balance. This threw me for a loop. What balance? I would think. There’s little or no bittering hop here; little in the way of malt character — where’s the balance in that?

But it wasn’t just Doug saying things like this; a number of our customers, especially our more wine-centric ones, were finding themselves enjoying IPAs, many for the first time.

I realize now that I was thinking of “balanced” IPA in terms of what it used to be — which I still love, mind you — back in the days of the IBU wars, when the more aggressively bitter your IPA was the more sought after it became.

With an emphasis on low bitterness, fruity aromas/flavors and specific varietal characteristics (from hops rather than grapes), Hazy IPAs are a great gateway beer for wine fans, many of whom are discovering that they didn’t dislike “hoppy” beer so much as overly “bitter” hoppy beer.

So, scoff at that orange juice-looking beer on Instagram (like I still do at more egregious examples), but bear in mind that it and others like it are expanding beer’s audience and consumer base at a time when between an explosion of new breweries, continued growth in hard liquor/cocktails and the looming competition of legalized marijuana (more on that at some point), new consumers are more important and more difficult to draw in than ever.