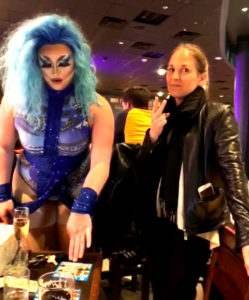 (Updated 3/28/19) Drag shows in Arlington are now taking their first high-heeled step outside the gay bar scene, but members of the scene say it hasn’t lost its roots.

For decades now, the only way to catch a drag show in Arlington, or Northern Virginia, was to head to Crystal City and line up at Freddie’s Beach Bar (555 23rd St S.)

But earlier this month, one bar in Clarendon began offering drag bingo nights as gay business leaders say growing demand for the glittery entertainment is opening up new doors for drag queens.

Ten years ago, RuPaul’s Drag Race set out to find, “America’s next drag superstar” but in doing so the reality competition show also launched drag onto a mainstream stage for the first time. The show has since garnered millions of fans online, launched modeling careers for contestants, and introduced straight viewers to historically gay slang like “kiki.”

And As RuPaul’s moved from a niche gay television network to VH1, so too did drag shows begin moving from the gay bars to the straight pubs.

“RuPaul has kind of made it more mainstream,” agreed long-time local drag queen Destiny B. Childs, who managed Freddies’ weekend drag shows for the last 15 years, adding that until recently not many straight bars hosted drag.

Arlington is now joining D.C. and other local jurisdictions in having drag events at straight bars. The mainstream move was kickstarted by the Board Room in Clarendon (925 N. Garfield Street), whose owner Mark Handwerger said he first had the idea to bring the glitz and glam of drag to his establishments after a trip to Las Vegas, Nevada.

“I went to a drag brunch out in Vegas and we ended up having to go to the 11 o’clock one because the 9 o’clock was sold out and the 3 o’clock was sold out,” he said of his trip with friends. “So it was like we came back thinking, ‘This could be a great fit’.”

Handwerger said to him incorporating drag events into the Board Room was no different than the modifications he’s made to his other bars like Buffalo Billiards as people’s taste changes.

“We try to look for trends and give people want they want,” he said.

But for the LGBT community, drag shows have been a fixture from the beginning. Over the decades, drag queens have donned make-up and wigs to start the Stonewall Riots and fundraise for AIDS research during the height of the epidemic.

Drag queens’ gender-bending performances are an integral part of the culture and history of queer and trans communities, stories some people worry could get lost in the translation to pop culture.

But Arlington is special, Childs and Lutz say, because traditionally Freddies’ encouraged mingling between the gay population and their straight, cis allies. Lutz said this is because when he bought the bar “Foxhole” and turned it into “Freddie’s” he never closed for renovations or kicked the regular bar clientele out.

“I just came in and started painting everything purple,” said Lutz. “We just had gay people start coming in and mixing with the dart-throwers. That was actually some of the most magical times.”

Lutz added that the tradition of commingling at the bar was cemented by the outbreak of HIV and AIDS, which some researchers estimate claimed the lives of 10 percent of all America’s gay and bisexual men ages between the 22-44 in the 90s.

“Everybody who’s had a partner who’s died of AIDS or a friend seemed to all the sudden have an extended family,” Lutz said.

In Arlington, 981 people have died from AIDS or AIDS-related illnesses since 1982.

“If anything came out of the AIDS epidemic it was that it brought people closer together,” Lutz said. “It sort of bridged the gap between the gay and the straight community.”

Today drag is strutting down that bridge to a straight bar near you, with a variety of drag brunches, bingo nights, RuPaul watch parties, and shows scheduled in bars across the Greater Washington region. And it’s also bringing in more straight audience members to Freddie’s, especially couples and bachelorette parties, Childs and Lutz said.

The greater visibility of drag has brought some protesters, like the two people who stood outside one of Freddie’s drag shows in August shouting “You will burn in hell if you don’t repent with this wicked, perverted lifestyle!” reported The Blade. But overall, Lutz and Childs say people behave themselves.

While he could have chosen to have a charismatic straight host for his bingo event, Handwerger said that drag performers elevate events to something special.

“Having a drag emcee just makes it a whole two-hour event,” he said.

Handwerger said he piloted drag in Arlington’s Board Room first because the Clarendon bar dwarfs his flagship D.C. location with 10,000 square feet of space. He’s told ARLnow he’s eyeing drag events for the D.C. bar, but in the meantime people can catch drag bingo hosted by local drag queens Crystal Edge and Katrina Colby on the first and third Mondays at the Clarendon bar from 9-11 p.m.

As for how the Board Room’s bingos are going? Handwerger said the crowd doubled by the second event.

“I am just impressed with all the time and attention and effort these folks put into it,” he said of drag queens. “And I’m glad to be part of that because the enthusiasm is contagious.”

And though queens may sashay away to new stages, Childs and Lutz don’t think drag is in any danger of disappearing from Freddie’s. The bar currently hosts drag shows every Saturday night, a drag competition every first Sunday of the month, and drag bingo every Wednesday night.

Childs said when she arrived at a show at two weeks ago people were lined up outside the gay bar.

“This is amazing,” she said. “This is something I put my heart and soul into for 15 years and I’m very pleased with that.”

There is one culture issue that can arise as drag shows become more popular, however.

“Straights don’t know to tip!” Childs laughed. She said queens try to coach the audience by reminding them of the no-touching rules and telling them to “get their dollar bills ready.”