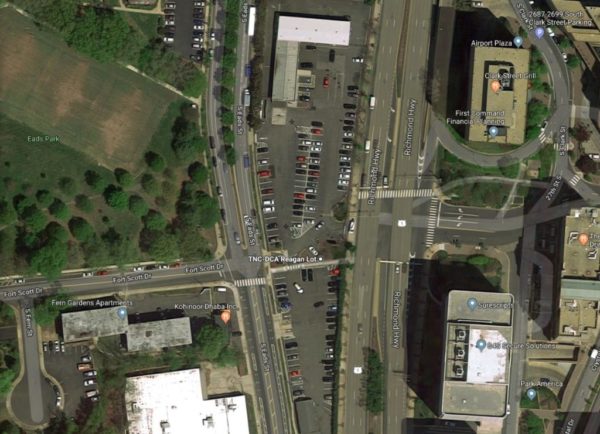 The civic association for Aurora Highlands and Crystal City are requesting the county officials take action on traffic caused by the Uber and Lyft waiting area along S. Eads Street.

The area, sometimes called the “TNC lot,” comprises two parking lots located at 2799 S. Eads St. where Uber and Lyft drivers must park while queuing for passengers at Reagan Airport.

The associations say there have been persistent traffic problems caused by the lot, and discussions about solutions have “stalled.”

That’s despite the county opening an entrance to and exit from the lot along Route 1, to ease traffic near the residential neighborhoods along Eads.

Aurora Highlands Civic Association President Scott Miles told ARLnow that as of last night (Thursday at 5 p.m.) the associations have not received a response from county officials.

Today, Uber’s guide for drivers picking up at DCA features a section how vehicles should queue in the waiting area, noting that, “When exiting the lot, left turns only are permitted in an effort to reduce traffic congestion along S. Eads St.”

Before picking the Eads space for the lot, the Airport Authority had set up a temporary parking space a block northward at Crystal Drive and 26th Street S. which also caused traffic headaches.