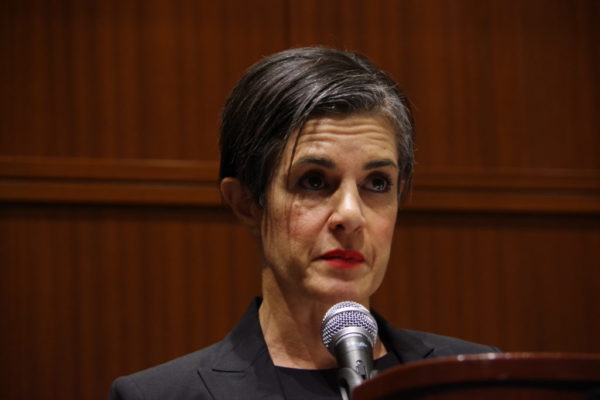 The Arlington County Police Department itself is now saying Tafti’s claim in a recent campaign mailer is “inconsistent with the facts.”

“It has come to our attention that recent political mailings and communications have suggested that the agency participates in problematic police practices,” said ACPD in a statement today (Tuesday) about Tafti’s reference to incidents where officers used force and which she claimed were examples of police brutality gone unpunished.

The police department also refuted Tafti’s claims in the mailer that the county’s policies on marijuana offenses disproportionately affect people of color.

ACPD values the strong relationship we've built with the community over the past 79 years. While we have no intention of engaging in the political process, it has come to our attention that recent political mailings have suggested the agency participates in problematic practices. pic.twitter.com/iZPGITkrOU

Earlier that morning, the Arlington Police Beneficiary Association and the Arlington Coalition of Police issued a rare statement (Tuesday) demanding Tafti apologize for the mailer they said made a “disgraceful and false allegation of police ‘brutality’ leveled at an Arlington County Police officer.”

Tafti is running a campaign for Commonwealth’s Attorney centered on criminal justice reform and has been a vocal critic of incumbent Theo Stamos. Tafti recently mailed a campaign flyer which cited a 2015 officer-involved shooting as an example of a case of “police brutality” that wasn’t prosecuted.

The incident in question involved an officer who shot a 54-year-old man three times on May 19, 2015, during a domestic violence call, after the man struck the officer in the face with a metal bar. An investigation into the incident ruled that the deadly force was justified, and cleared the officer of criminal charges.

“Any insinuation of police brutality surrounding this incident is inconsistent with the facts,” said the ACPD in their statement.

Arlington Police Beneficiary Association Advisor and Past President Matt Martin told ARLnow that the organization “rarely” issues public statements, “but this was important enough that we had to set the record straight.”

In a statement to ARLnow, Tafti responded to the criticism, saying:

As I have spoken to voters throughout the course of this campaign, it is clear that they want accountability, transparency, and impartiality from all of us responsible for the administration of criminal justice, including the Commonwealth Attorney’s office. What was not mentioned in the police statement was that the mother of the victim said he was schizophrenic and possibly off his medications, and that he did not initiate any violence. The mother only spoke Spanish, and the police could not communicate with her. The medical examiner determined her son was killed by a shot to his back. This is the exact fear I have heard from parents of children with serious mental illness and members of our immigrant community throughout Arlington and the City of Falls Church, and is a prime example of why we need a criminal justice reformer in our Commonwealth’s Attorney’s office.

In a case not mentioned by the APBA and the ACP, the current Commonwealth’s Attorney prosecuted a case against a man who was the victim of an assault by a police officer during a traffic stop. In ruling that the man had not provoked the assault by the officer by assaulting him first, the judge said “I hold police officers to a higher standard.”  Voters have told me time and again that they want a Commonwealth’s Attorney they can trust to be impartial and hold everyone accountable. Seventy-two percent of Virginians say they want criminal justice reform, but it has become a standard trope that those opposed to reform accuse reform candidates of being anti-police. I am not anti-police, but pro-accountability and pro-community.

The association and coalition called for a “full public apology” from the candidate that acknowledged the “officer-involved shooting was lawful.”

The groups also asked public officials who endorsed her campaign to withdraw their support or to issue a statement “condemning her false ‘brutality’ accusation.”

Together with the Arlington Coalition of Police, the two orgs specifically pointed at this campaign mailer which accuses Commonwealth's Attorney Theo Stamos of "refusing to prosecute police officers in cases of brutality" with links to two cases at the bottom. pic.twitter.com/GRza1Fq6pF

“This officer — who, it should be noted, needed more than 60 stitches to close the wound on his face — used deadly force to protect himself after he was attacked by a man with a metal bar,” said Arlington Police Beneficiary Association President Rich Conigliaro.

“Any assertion that this shooting was anything other than justified is a distortion of the facts,” he added.

“Our officer’s actions that day as he tried to help a victim of domestic abuse were clearly in self-defense,” said Arlington Coalition of Police President Jeff Lubin. “Falsely accusing him of ‘brutality’ is shameful and he and all of Arlington’s police officers deserve an apology.”

Tafti’s mailer also listed another case of alleged police brutality, in which a man said an officer beat him during a 1991 routine traffic stop. The officer was not charged in that case.

Conigliaro and Lubin noted that the officer was not criminally charged and left the department that year to join the Secret Service.

Voters will decide whether Stamos or Tafti become the Democratic candidate for the Arlington and Falls Church prosecutor’s office in the primary election on June 11. Residents who want to vote must register no later than May 12.