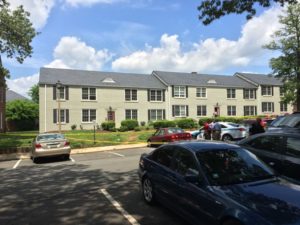 The Arlington County Police Department has released a timeline of an officer-involved shooting in Buckingham on May 19.

An officer fatally shot 54-year-old Alfredo Rials-Torres in his apartment on the 4200 block of 2nd Road N. after responding to a 911 call for a domestic disturbance. Two officers and the deceased man’s mother were hurt in the incident.

“The following timeline provides an account of the incident according to officer and witness interviews,” the department said in an email. “The investigation remains ongoing at this time and will be presented to the Commonwealth Attorney in the future.”

10:51:44 – Initial 9-1-1 received by the Arlington County Emergency Communications Center (ECC) for a possible domestic disturbance.  The reporting party informs the dispatcher they hear a female screaming from inside an apartment.

·         The first two officers make contact with both parties believed to be involved in the domestic dispute at the front door of the apartment.

·         Male party becomes confrontational with officers and attempts to slam the door closed.

·         One officer places his foot in the door to prevent the door from closing and to avoid losing sight of and contact with the parties involved.

·         Male party raises a metal pole in an aggressive manner, prompting an officer at the threshold to deploy his taser.  The taser deployment was unsuccessful and the officer is struck in the face with the end of a metal pole by the male party.

·         The officer sustains a significant facial injury – a serious laceration.

·         A second taser deployment occurred by the same officer. That was also unsuccessful as one of the prongs struck one of the other officers in the arm, temporarily incapacitating him.

·         The tased officer retreats to the exterior of the apartment building because he is unable to assist with the situation.

·         Physical struggle ensues inside residence with the male party violently swinging the metal pole, prompting the officer to discharge his firearm out of fear for his safety and the safety of others.

·         Three shots were fired, each striking the male party in the upper body.

·         The third officer enters apartment and secures the scene until arrival of EMS.

10:59:54 – The third officer provides radio transmission w/ situational report, to include injuries to two officers & the parties involved in the domestic disturbance.