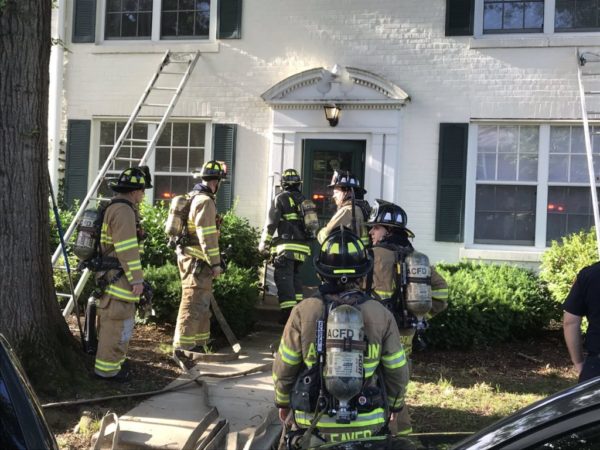 (Updated at 1:30 p.m.) One person has died after a fire in Ashton Heights, near Ballston, Tuesday morning.

First responders were dispatched to a garden-style apartment on the 3800 block of 5th Street N at 7:44 a.m. today where they found an unconscious man in the living room, the Arlington County Fire Department said in a statement at 1:30 p.m. today.

“There was no fire evident when firefighters arrived, but the reporting party told firefighters it smelled like something was burning in the building,” said the department. “Firefighters on the back of the building identified the source of the smell as a first-floor apartment. They forced entry and found a small fire on the stove at the rear of the apartment that was quickly extinguished.”

By the time they found the man, the apartment had filled with smoke, department spokesman Capt. Ben O’Bryant told ARLnow at 11:15 a.m.

The man was rushed to a local hospital as medics performed CPR, according to O’Bryant. He was later pronounced dead.

Authorities are not yet releasing the man’s name, as they work to notify next of kin. He was only identified as an adult male.

As is standard for a fatal fire, the fire marshal’s office and Arlington County Police are jointly investigating the cause of the fire and the man’s death.

There was no fire evident when firefighters arrived, but the reporting party told firefighters it smelled like something was burning in the building. Firefighters on the back of the building identified the source of the smell as a first-floor apartment. They forced entry and found a small fire on the stove at the rear of the apartment that was quickly extinguished.

Upon searching the residence, firefighters located an unconscious adult male in the living room. The occupant was immediately removed from the apartment and resuscitative efforts initiated by Fire/EMS personnel. Responders continued to treat the patient en route to the hospital where the patient was later pronounced deceased.

The fire was contained to the room of origin and did not affect any other residences in the building. There was a smoke detector installed in the apartment, but it did not contain a battery.

Investigators from ACFD Fire Prevention Office and ACPD responded and are working collaboratively to investigate the fire. The cause of the fire is still under investigation.

The identity of the deceased is being withheld pending notification of next of kin. The cause of death will be determined by the Office of the Chief Medical Examiner. No further information is available at this time.