This week, Arlington County Board members will consider a proposal that would allow them to raise their salaries for the first time since 2012.

Members are scheduled to vote tomorrow (Tuesday) to raise the maximum level at which they can set their salaries, choosing from one of three possible options:

The report also noted that current salary levels are below the regional median income level for a single person ($85,000) and the level for a family of four ($121,300) and are generally below salaries paid to regional legislators in other jurisdictions. 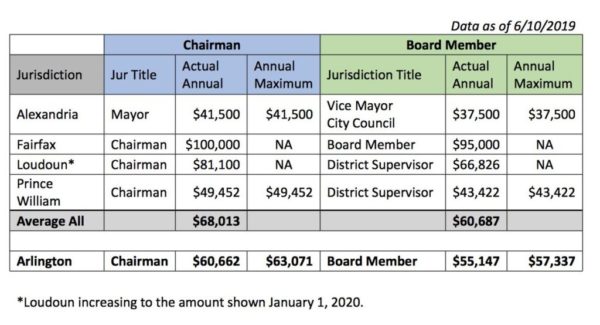 The Board has until July 1 to vote on the raise, otherwise they’d have to wait another four years for a chance to vote again.

Serving on the County Board is intended to be a part-time position, though in practicality the schedules of Board members leave little time for other jobs.

Board member Libby Garvey previously said her colleagues needed higher salaries to keep up with the work involved in attending the county’s many local and regional group meetings.

“I talk to people about how we’re a five-member basketball team with no back-ups so we have to play the entire game all the time,” she said.

New salary caps would go into effect Jan. 1, 2020 if the Board approves them tomorrow, and would last until Dec. 31, 2023. Members would be able to decide after January whether to raise their salaries, up to the the maximum amount they set.

Read more →
More Stories
BREAKING: Police on Scene of Stabbing in Virginia SquareLegal Insider: The Benefit of Severance Agreements for Employers and Employees