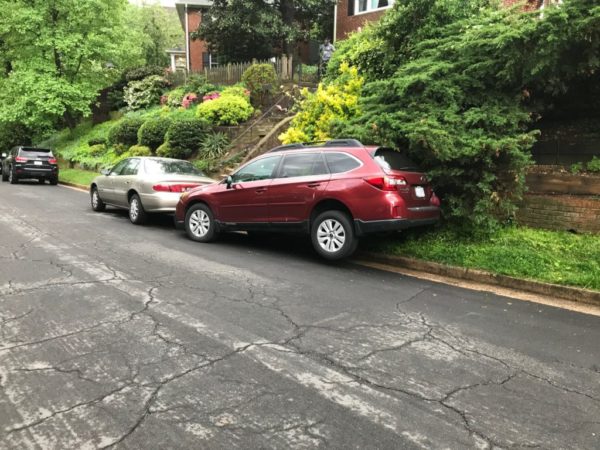 Arlington County has promised to build a sidewalk for every street, but when it comes to some residential neighborhoods progress is slow.

The main way sidewalks are built in residential areas is via the Neighborhood Conservation (NC) Program, which was created in 1964 and allows neighbors to weigh in on proposed sidewalk designs, among other small local projects that are proposed for county funding.

Officials told ARLnow the program is meant to give weight to resident feedback, which means concerns over parking and frontage sometimes trump pedestrian considerations.

Now the Arlington County Board is reviewing the NC program, and asking questions like, “Do NC Projects contribute to an appropriate balance between neighborhood and Countywide infrastructure goals and objectives?” according to a draft presentation with a working group meeting last week.

NC Program Manager Tim McIntosh told ARLnow during an interview last month that it’s a “lofty goal” to build a sidewalk on at least one side of every street, and it’s also hard to evaluate how much progress has been made.

“I don’t know that there are any statistics on how many sidewalks have been built since that plan has been put in place,” he said.

“There are several challenges to building sidewalks on every street,” Arlington Dept. of Environmental Services spokesman Eric Balliet said. “In addition to the availability of eligible funding sources for improvements in neighborhoods, there are competing interests for the right of way on every street.”

“In some cases, adding a full sidewalk with curb and gutter would come at the expense of on-street parking, or it could impact private properties in the form of tree removal, yard regrading and retaining walls,” he added. “There also may be differences among residents on a street about providing needed easements. Our job is to balance these interests, as well as costs, as we implement projects.”

McIntosh said the public is generally supportive and wants to see sidewalks installed, “But once you start to get into the weeds and talk about where it’s going to be, people get a little more reserved about, ‘Well, geez, how is this going to affect my frontage? Or the parking on my street?'”

Bob Cannon, a Lee Heights resident, has long wanted a sidewalk on a particular stretch of the 2300-2400 blocks of N. Vernon Street, in the Donaldson Run neighborhood.

The street is unmarked and cars regularly speed around curves, he said. In May, one car drove over the curb near Cannon’s house, blew out a tire, and hit his neighbor’s car. He says crashes like this are common and pose a danger to pedestrians who have nowhere to walk but on the road. He’s frequently asked the county to build a sidewalk, or add speed bumps, bollards, or lane paint to improve safety, according to emails reviewed by ARLnow.

“I do not understand what the problem is,” said Cannon. “The solution is simple.”

Thus far, the county has not revealed plans to add a sidewalk to portion of the road in question.

“Can it improve? Absolutely,” said WalkArlington Program Director Henry T. Dunbar of the sidewalk building process. “That’s why we really push people to get involved.”

Dunbar said WalkArlington is training residents about pedestrian safety and how they can work with organizations like the Pedestrian Advisory Committee to push for safety improvements like sidewalks on their streets. One way he said WalkArlington helps is by conducting “walk audits” of neighborhoods with residents and identify danger spots.

The pedestrian element for the county’s Master Transportation Plan was last updated in 2008. At the time, the document noted that:

Arlington currently lacks a complete sidewalk on almost 20 percent of its local streets. While work is under way to construct missing sidewalks, at the current pace of funding and construction, the sidewalk network is not likely to be complete for another 25 to 30 years.

Dept. of Environmental Services spokesman Eric Balliet said the department is currently reviewing the pedestrian element and deciding when DES can begin updates, as it recently did with the plan’s bicycle element.