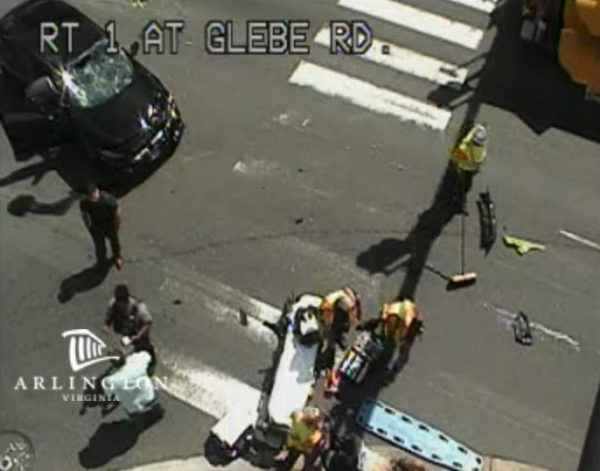 (Updated at 1:35 p.m.) Police and firefighters are on scene of a potentially serious motorcycle crash at the busy intersection of Route 1 and S. Glebe Road, near Crystal City.

The driver of a car struck a motorcycle shortly before 11 a.m. Images from the scene show medics treating the injured motorcycle rider and preparing to place him or her on a stretcher, while a car with a shattered windshield and significant front-end damage sits nearby.

Drivers should expect delays near the intersection due to blocked lanes. As of around 11:30 a.m., southbound Route 1 is currently blocked and eastbound S. Glebe Road is being diverted onto S. Eads Street, according to scanner traffic. A traffic camera at the intersection that initially showed the crash scene appears to have been turned off.

The rider’s injuries “are considered critical but non-life threatening,” according to Arlington County Police. Detectives are in the process of documenting the scene and investigating the cause of the crash.

UPDATE: The motorcyclist's injuries are considered critical but non-life threatening. The cause of the crash remains under investigation.