Peter’s Take is a weekly opinion column. The views and opinions expressed in this column are those of the author and do not necessarily reflect the views of ARLnow.com

Arlington’s massive July 8 flash flooding — vividly captured by ARLnow.com in videos and photos — exposes yet again Arlington’s failed approach to stormwater planning. That is the emergency Arlington also should have declared last week.

Arlington is in a floodplain 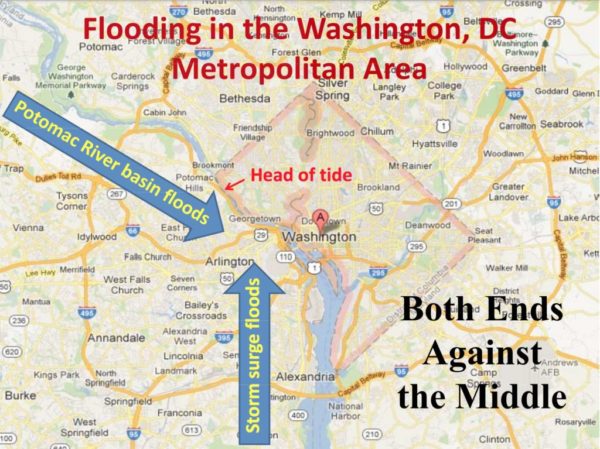 “Alexandra Lettow was near tears as she described the losses her family suffered from Monday’s flooding to neighbors and county officials gathered at a home in Arlington’s Waverly Hills neighborhood….

“She and other residents say the county government has taken far too long to study the problem without making any fixes, especially in an era where climate change is triggering more intense and frequent storms….

“Five years ago, several projects to fix Arlington’s aged storm drain system were on the capital improvements program list, only to quietly fall off without explanation. The repairs would have addressed Spout Run stream overflows in Waverly Hills.

County government has chosen not to exercise legal powers that Arlington already possesses to reduce our rapidly growing environmental threats.

Arlington’s land use and development practices — which the County Board controls — exacerbate increases in the speed and volume of stormwater runoff. Whether or not flooded areas lie in FEMA-designated floodplains is immaterial. Board members must acknowledge nature’s latest wake-up call by strengthening County codes and planning to address increasingly unsafe conditions in Arlington.

As Arlington redevelops and adds density, one statistic stands out: between 2001 and 2017, the percentage of impervious surfaces covering Arlington has grown from an estimated 40% to 45%, with 3% of that increase occurring within the past 4 years.

According to County staff, the pace and intensity of redevelopment adds nearly 9 acres of impervious surface area each year–about 29 acres every three to four years, equal to the size of the Pentagon’s footprint.

“Preserving undisturbed vegetative cover during land development is a much more cost- effective approach than destroying these features and having to construct new stormwater management practices to replace the functions they originally provided,” says the Center for Watershed Protection.

Extensive damage to public parks occurs even as County staff evade the most basic of planning tools by refusing to perform Environmental Assessments for park projects that substantially expand the existing footprint of park infrastructure, add impervious surfaces, and remove large numbers of mature trees.

Loss of trees and pervious surfaces leads to an increasingly unstable environment for Arlington residents.

Overhaul and reorient Arlington’s 2014 Stormwater Master Plan and update the 2004 Flood Frequency Analysis to take into account and confront these threats:

To address our emergency, Arlington must immediately: