Faster wireless networks may be coming soon to a street near you, thanks to a new vote from the Arlington County Board.

The County Board approved an ordinance change to allow wireless carriers to install the small-cell technology needed to deploy 5G on public property. This paves the way for carriers to begin installing the necessary antenna systems on light poles throughout the county.

Board Chair Christian Dorsey said he was excited for 5G’s possibility to enhance emergency services by letting paramedics diagnose problems while still in the ambulance, and making it easier for people to connect with doctors through telehealth conferencing, among other new possibilities.

“To me it’s those kinds of things that make it worth our pursuing this,” he said. “Not for the faster speeds on our on our smart phone.”

The decision comes after a year of discussions in Arlington and state legislation from Richmond encouraging the technology.

Nate Wentland, the county’s chief business technology officer shared how the wireless technology is about 20 times faster than the current 4G networks, allows more people to connect to it, and would allow more Smart City technology like telehealth and autonomous vehicles.

Dorsey added that the “appreciated” the dozen residents who took to the podium to express concerns over possible health effects from exposure to the radiation.

“This is something that we have our eyes wide open about,” he said. “We want to measure the impact.”

Several residents criticized the plan during Tuesday night’s meeting out of concerns over possible health effects from the antenna radiation. Residents in neighboring jurisdictions have also raised concerns about the issue.

“I don’t believe it’s unreasonable to ask the county how it plans to mitigate that risk,” said independent Board Candidate Audrey Clement.

But officials pushed back on the health concerns, saying that widely-accepted science finds no harmful effects from 5G technology. Wentland cited research from the FCC, the FDA, the CDC, and the American Cancer Institute that radiation from small cell technology is not known to be carcinogenic.

Board Member Erik Gutshall said that if new evidence arises demonstrating negative health effects from the technology the county “has the opportunity to protect ourselves and terminate [the license] with the public interest.” 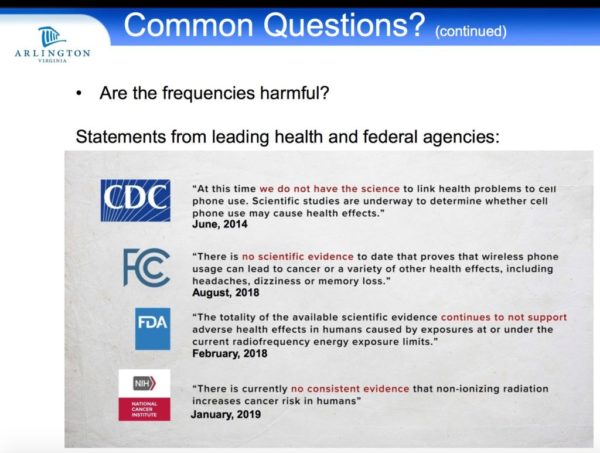 Vendors (like AT&T or Verizon) that want to install the small cells will have to foot the $9,000 bill for the tech and the new pole, but Arlington County will own the pole. VDOT turned down proposal for traffic signals because of concerns about visibility.

Under the county’s listening agreement with cell carriers, the county will require radiation emission testing from a independent party for each pole 60 days after installation, and can request additional testing any time afterward. County Manager Mark Schwartz told residents that the data from these tests will be shared publicly.

Vendors will also have to sign a 10 year agreement with the county to install the tech, with the option of a five-year extension. Arlington will require them to pay a one-time $250 administrative fee to the state, an annual $270 fee to the county, and cover any utility costs.

“We are becoming a center for innovation and high technology with the advent of… Amazon coming here,” said Jonathan S. Adelstein who heads the Wireless Infrastructure Association and is a former FCC Commissioner.

“We need that capacity and residents here expect the highest quality of wireless services,” said Adelstein, who lives in Bellevue Forest. “I think it adds to property values here.”

The county has issued 75 permits allowing companies to install the antenna system on private property as of March 2019, per a staff presentation to the Board.