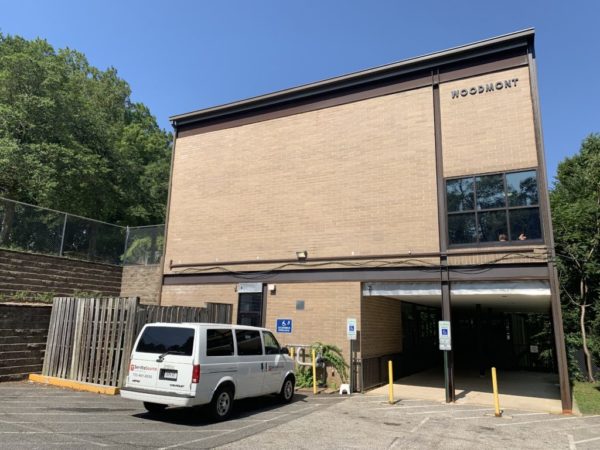 A county facility that serves people with developmental disabilities was spray painted with “an array of racial and gender slurs” earlier this week.

Staff members at the Woodmont Community Integration Center on the 2400 block of N. Fillmore Street discovered the hateful graffiti all over the building and a vehicle early Tuesday morning. Police were called and are still investigating the incident, an ACPD spokeswoman said.

The center shares the building, in Woodmont Park, with the YMCA’s Woodmont Gymnastics Center.

“When staff arrived for work on Tuesday morning, they found an array of derogatory words written across the outside walls and windows of the CIC,” a tipster tells ARLnow. “Similar words were also written adjacent to the main entrance of the YMCA (on the upper level), on several disabled parking signs, and a van.”

The graffiti has since been removed by county crews, but the center closed early on Tuesday due to the nature of the words, which were described by a county official as “derogatory” and “hateful.”

“We will be exploring additional measures to increase safety at the site, and the Arlington Police will continue heightened surveillance of the entire area,” wrote Arlington Dept. of Human Services Director Anita Friedman, in a letter sent to “families and friends of the Community Integration Center.”

Family and Friends of the CIC — Upon arriving for work on Tuesday morning, August 5th, staff noticed the walls and glass windows adjacent to the entrance of the CIC covered with an array of racial and gender slurs, as well as derogatory words targeting people with developmental and other disabilities. Similar words were also written on the entrance to the YMCA (upper level of the building), signs for disabled parking, and the MVLE van, which was parked in the main parking lot and used for the Arlington cleaning enclave.

The staff immediately contacted the Arlington County Police, which responded to the scene right away. This matter remains under investigation by the Arlington Police.

The Arlington Departments of Environmental Services and Parks and Recreation also responded to the CIC to begin the process of removing the hateful words from the glass windows and walls. Cleaning the glass windows was relatively easy; however, removing the words from the brick walls has been more difficult. We are hopeful to have zero physical evidence of the words by the end of the week, though it will take much longer for the hurt caused by such words to heal.

ServiceSource, in consultation with DHS staff, made the decision to close the program on August 5th to allow time for clean-up and to process the emotional impact on staff, which will be ongoing. We also wanted to minimize the exposure of such hatred to our participants of this program.

DHS staff trained in trauma and crisis management were at the CIC to support the ServiceSource staff and process this event. Lastly, the County Manager and Arlington County Board have been made aware of this matter.

I personally condemn this kind of hatred. It has no place in our community and will not be tolerated by our leadership. Our staff here at DHS are working closely with ServiceSource to ensure the continued safety of all CIC participants and staff. We will be exploring additional measures to increase safety at the site, and the Arlington Police will continue heightened surveillance of the entire area.

Thank you for continuing to entrust your son or daughter to our care along with Service Source as our partner. Please feel free to reach out to La Voyce Reid, Bureau Chief, Developmental Disability Services, with any questions or concerns you may have.

Ashley Hopko and Vernon Miles contributed to this report.