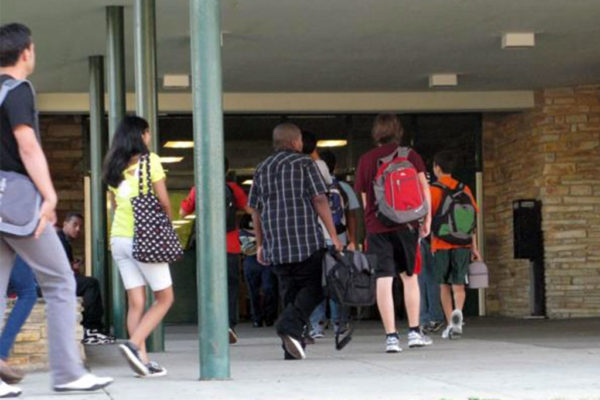 The following Letter to the Editor was submitted by Arlington Public Schools parents Amina Luqman-Dawson and Robert Dawson, following the publication of our article, Group of Black Parents Say Racial Disparities in Arlington Schools Need to End.

For parents with black children in Arlington Public Schools, hope and wariness accompanies the experience. Like other families, we have hopeful expectations about our community’s excellent schools. We read the headlines. APS Named Top School System in Virginia for the second year in a row. Four of our high schools are ranked in the top 2% of schools nationwide. We hope our children will also be beneficiaries of that excellence. Yet, the data tells a different story. It tells a tale of (at least) two school systems in one County. One which offers countless advantages to white children, the other which offers far less to black children.

The tale unfolds in APS’s own published data recently compiled by Black Parents of Arlington. In one story, a white child enters APS, and from the first years in school, that child has a one in four chance of being identified as gifted. By middle school that child has a 46% chance of being of being labeled gifted. 46%! That “gifted” child will be, at times, clustered with other “gifted” students, and will ultimately end up in higher-level classes which are disproportionately white. Just as the white child’s high intelligence will be presumed, that child’s innocence will also be presumed, with a far lower likelihood of being suspended than their black and Latinx counterparts.

For instance, at Thomas Jefferson Middle School, despite a 32% white population, white students account for only 9% of suspensions, and at Yorktown High School, despite a 65% white population, white students constitute only 28% of suspensions. In their course work, the white child has about a 90% chance of taking at least one AP/IB course and around an 80% chance of passing at least one AP/IB exam. The white child will almost certainly graduate on-time, but more importantly, has around an 80% chance of graduating with an advanced diploma, best suited when applying to competitive colleges and universities. For white students, the tale of APS is often a great one.

In contrast, the APS tale is quite different for a black child. It begins in elementary school, where a black child has only a 12% chance of being identified as gifted. By the time that child reaches middle school, it rises to 21%. As the child’s gifted identification is lower than the white child, her/his presumption of guilt is far higher. For example, in suspensions at Thomas Jefferson Middle School, despite a black population of 17%, black children received 82% of suspensions. At Washington and Liberty High School, despite a 9% black population, black children constituted 43% of suspensions. APS data only reflects the most punitive sanction, suspension.

We still don’t know about disproportionate uses of other disciplinary measures, such as detention, in-class and in-school sanctions that disrupt a child’s learning and define how black children see themselves. In their course work, about 62% of black students will take at least one AP/IB course. However, a black child has only a 30% chance of passing one of those course exams. Is it any wonder; after they’ve been over disciplined and under educated relative to their white counterparts? Although it’s highly likely a black child will graduate on-time, it’s not likely that child will leave APS with an advanced diploma. Only 46% of black children graduate with an advanced diploma. The tale of APS for black students isn’t quite as bright.

The data also shows that prospects for black students may differ depending on the APS schools they attend. For the past two reporting years, SOL disparities in math and reading between black and white students are relatively small (a 0 to 10-point difference) in some elementary schools, including Arlington Traditional, Long Branch, Randolph, Campbell, Carlin Springs and Arlington Science.

In a couple of instances, black student pass rates exceeded those of their white counterparts. More data and investigation are needed to learn about what makes these schools/circumstances different. Are there replicable models? Pass rates for black students in AP/IB courses are low. Are they equally low among all APS high schools? Are there differences that could shed light on improving the outcomes for all? Let’s do the work.

There are likely more than two tales in APS. Latino students and students with special needs have their own tales. Let’s not fool ourselves into thinking that solving these entrenched inequities will be easy. APS must be thoughtful and employ research-based methods in formulating solutions.

APS’s newest hope is the creation of a Chief Diversity Officer position. Has APS done its homework and searched out models and best practices around the nation for establishment of a Chief Diversity Officer? Are we in conversation with other school districts? Even a rudimentary investigation shows that the position can be serious, resourced with staff and empowered, or it can be window dressing to add to a list of things a district is “doing” to address disparities. Are we going to be serious about creating change or settle for the impression of it?

Some readers may look at the data and assess blame on the same black families who have noted these racial inequities, blaming our “culture” or a perceived lack of interest, while implying conversely that the disproportionately higher outcomes for white students are the result of the values and extraordinary abilities of white families, as if somehow APS, with its tremendous resources, does not play a significant role in tilting the scale. If you are such a reader, you are not our audience.

However, if you are an Arlingtonian of goodwill who understands that historical and systemic racial bias seeps into almost every facet of our society, from housing to healthcare, and that our schools are not immune to that reality – even in liberal Arlington. We seek a conversation with you.