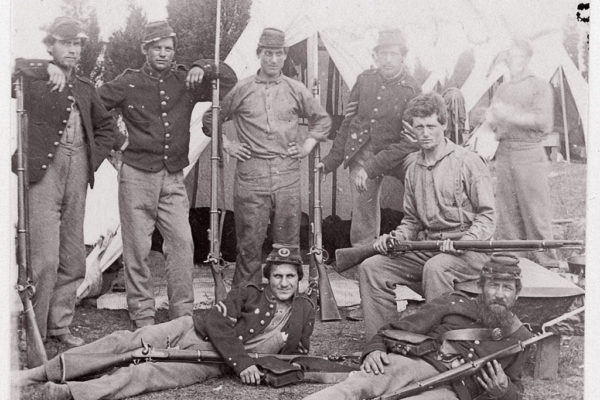 Union soldiers stationed at Bon Air Park will offer a tour of their fortifications and military lifestyle tomorrow (Saturday) as they keep a watch on Confederate skirmishers to the south and west.

The Civil War reenactors will be posted at the park along Wilson Blvd and Four Mile Run from 10 a.m.-4 p.m. to honor the 158th anniversary of the Ball’s Cross Roads Skirmish, part of a series of small battles along the defenses of Washington, D.C. in the wake of the First Battle of Bull Run.

An article from the New York Times cited one Union death and two wounded, and up to 15 Confederate casualties.

“The companies under the command of Capt. Todd and Capt. Dingleday, of the Twenty-third New-York Regiment, conducted themselves heroically, returning the enemy’s fire, which evidently told upon them severely, and repulsed them, and after the rebels had retreated, fell back to the Cross Roads in good order, after which the pickets were again advanced to their original position, and there remained,” the New York Times reported. “Too much credit cannot be given to the officers and men, as each man behaved splendidly.”

The event is free to the public, and will include military drills, a photography exhibit, and various camp displays. One word of warning: the bathrooms at Bon Air Park remain inoperable due to storm damage, which will presumably lend the camp more mid-19th-century authenticity.

More from the event page:

During the war the area near Ball’s Cross Roads and Upton hill was host to tens of thousands of Union and Confederate troops. From June to October of 1861 Arlington’s Four-Mile Run Valley was witness to several Civil War skirmishes. One of the largest occurred on the afternoon of August 27, 1861. Several hundred Union soldiers from the New York 23rd were performing picket duty east of the railroad, which was then called the Alexandria, Loudon & Hampshire. The Union skirmishers were fired upon by Confederates from the 11th Virginia.

The military engagement, as documented by the New York Times, lasted several hours and involved close to 900 soldiers spread out along both sides of Wilson Blvd. including Bon Air and Bluemont Parks. Recent research, including written first hand accounts, suggest the skirmish may have been part of a much larger military operation conducted by the Confederates to probe the Union lines. The engagement, which included an artillery bombardment of Hall’s Hill, resulted in several soldiers being killed and wounded on both sides. The proximity of the skirmish forced General George McClellan to strengthen the forts protecting Washington DC.