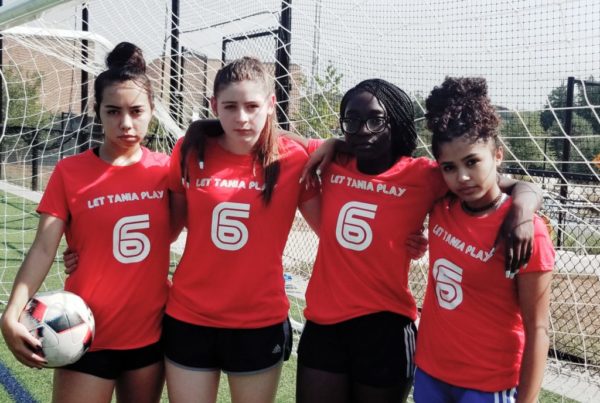 (Updated at 5:15 p.m.) One of Arlington’s youth soccer teams is forfeiting games after members say a player was wrongfully removed from the team.

The Division 1 recreational soccer team LAFC has already forfeited two games, and members say they may forfeit a third this weekend if fellow player Tania Mendez can’t join them on the field. Her coaches and teammates are protesting a decision by the organization that oversees the league, the Arlington Soccer Association (ASA), which said she was too old to play.

The issue came to a head when an ASA official showed up at a game on Saturday, September 21, and told the team their forward was no longer allowed on the field — something coaches said was a change in policy.

Coach Deanna Herrity told ARLnow it was the players who then made a decision: “I asked my team if they wanted to play the second half without Tania. And they said ‘no.’ And I said alright ‘we leave.’ And we left.”

‘Playing makes me feel at peace’

Tania Mendez immigrated to the U.S. when she was 14 after growing up in El Salvador. She’s lived in Arlington for the last five years.

After arriving in the U.S., learning English meant repeating grades 8 and 11. Now she’s 19 and starting her her senior year at Wakefield High School. But no matter where she’s lived, she’d played soccer, and even dreamed of going pro when she was younger.

“All my life has been spent playing soccer and I think that there’s no other sport that makes me feel as happy as soccer does,” Mendez told ARLnow in an interview in Spanish. “Every time I’m on the field I forget everything else, playing makes me feel at peace.”

But after playing two games with the team this season, ASA’s Recreational Soccer Commissioner David Gould informed the team midway through their game on Saturday, September 21 that Mendez was ineligible to play due to her age. Several teammates and her the team’s coaches told ARLnow it was a confusing confrontation, with Mendez telling ARLnow that she was speechless at the time.

“It was a very diminishing moment,” said one of her teammates, Valentina, 17, a senior at Washington-Liberty High School. “She just doesn’t deserve the treatment she’s been receiving from the ASA.”

Coach Herrity said the ASA has helped make the league welcoming for all kinds of players in the past, including by offering scholarships to cover registration fees. However, she said she fears this action represents a new policy that could harm other players like Tania who also need their help.

“It’s going to disproportionately affect immigrants,” she said in an interview with ARLnow. “Oftentimes you’ll have friends who are immigrants who are not the typical age of the peers of the grade.”

It’s a concern she said she worries about in the larger picture of youth soccer participation falling, and becoming a sport for wealthier, whiter children.

Coaches Andrea Leeson and Herrity had registered Mendez with the ASA, but that on the Friday before their second game, the organization emailed them that Mendez had been removed from the roster “effective immediately” because of her age. After not receiving a reply to their follow-up emails, the coaches put Mendez in the game the next day, which led Gould to arrive and ask her to be removed.

Leeson and Herrity said they were surprised by the ASA’s actions because it had been a long-standing policy at ASA to approve older players who had stayed behind to catch up on English.

In the ASA’s handbook, it notes that the recreational soccer leagues are sorted by grade level groups, “with the exception of players who are out of sync with other students their age (i.e.: due to repeating or skipping a year or more of school).”

ASA approved a 19-year-old player on the team earlier this year, according to emails reviewed by ARLnow. Emails showed how written requests from the coaches for an exception led ASA staff to manually override the age limit in the online registration system.

In the February emails, Gould wrote that helping with the registration was “not a problem” and added that “she’s back there now!” in reference to the player signing up. That lenience, however, has seemingly changed.

“Arlington Soccer Association has allowed 19 year old players up until now, but [recently has] chosen to interpret their policy such that this 19 year old girl cannot play,” Leeson said. “We have exhausted our options in discussing this with them, as they don’t respond to our emails or requests to discuss this in more detail.”

ASA Executive Director Adam Brick responded after publication, telling ARLnow that, “While I am unable to comment on any specific individual’s situation, I am happy to clarify the age-limit rule which comes under the auspices of the United States Soccer Federation (US Soccer), US Youth Soccer (USYS) and the Virginia Youth Soccer Association (VYSA).”

Brick emphasized that based on age-grouping charts posted here from the VYSA, a student who turns 20 years old in 2020 is not eligible for youth soccer programs.

“It’s a lot more than soccer for us. It’s a lot like a family,” said Herrity, who said she and Leeson took their players on 15 college tours, a 5K race, and out to see Supreme Court Justice Sonia Sotomayor speak last season.

A week after Mendez was pulled from the September game, her teammates and coaches made orange shirts emblazoned with her number (6) and the words “Let Tania Play.”

Leeson snapped a picture after the girls wore the shirts to the forfeited game on September 28, showing four teammates — Natalia Chow (left), Natalie Herrity (center left), Cecilia Fosso (center right) and Azelia Gonzales (right) — standing together with their arms on each other’s shoulders.

Coaches and players told ARLnow they want to forfeit their next game at Williamsburg Middle School at 4 p.m. this Saturday, October 5 if Mendez can’t join them.

Forfeiting from the start will allow the opposing team an automatic win, but also allow the players to hold an unofficial game amongst themselves — with Mendez.

“I’m proud to be part of my team,” said Mendez. “I don’t consider it my team, they are my family.”