Most people use facial recognition technology, a fingerprint reader, or a four-digit password to unlock their phones. Some go even further with two-step authentication. And as we continue to integrate crucial information into our phones such as account passwords and bank cards, SensiPass CEO Mike Hill realized people should use a three-step verification password for maximum security — and his startup was born.

In order to unlock a phone, SensiPass scans a QR code or a number pattern, analyzes a unique physical object (i.e. a face), and finally, the user draws a distinct pattern over the object to create their 3-factor “digital signature.”

A demonstration can be seen in the video below.

It sounds complicated, but Hill told ARLnow that it takes up to six seconds, maximum, and provides top-notch security.

“It’s virtually impossible to fake or share with others, and this is for everyday people,” Hill said. “With Snapchat, you draw on your selfie as a means of social expression. On SensiPass, you would use your face as a three-factor authentication.”

“When we first started on the product, we realized the consumer wouldn’t be ready for it because it was just so different from the password they were used to,” Hill said. “But it’s far more secure than anything out there.” 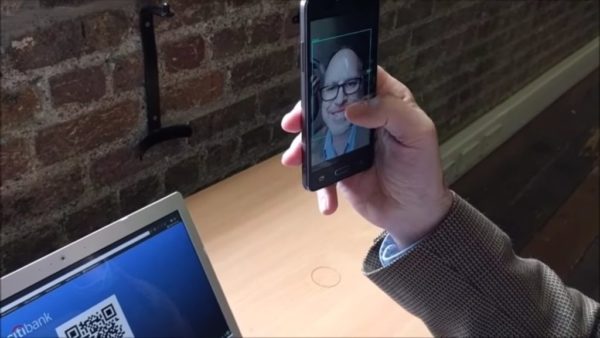 Once finalized, the patented product is expected to be be available for both iPhone and Android users.

In 2014, after failing to secure initial funding in the states, SensiPass headquartered itself in Ireland. Recently, the team opened a subsidiary office in Clarendon in order to be closer to partners working in cybersecurity and counterterrorism.

Here in Arlington, Hill said they’re looking to work with more investors in the area before launching the official product.