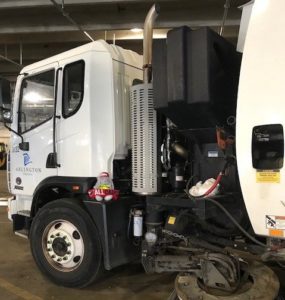 Arlington’s fleet of street sweepers will be hitting the streets less often due to budget cuts.

The reduction only applies to residential neighborhoods, however. The sweeping schedule for commercial areas remains the same — 26 passes a year.

The new schedule went into effect with the new budget on July 1.

The next residential sweep is scheduled for this Friday, October 25 in Waverly Hills, Woodmont, Maywood, and Cherrydale (as well as the Cherrydale Nature Center.) Kruljac told ARLnow that DES also revised the neighborhood groupings for sweeping (“zones”) in July for greater efficiency.

Debris left on the street can make its way into storm drains and either clog them or pollute the waterways it washes into.

“We anticipate collecting 1,000 tons of debris on the new sweeping schedule this fiscal year, as compared to 1,500 tons collected in Fiscal Year 2019,” said Kruljac, when asked whether fewer sweepings meant more debris in the storm sewer system. “Whether or not the uncollected debris finds its way into the storm sewer system is dependent on the weather and other variables.”

She added that DES does not currently have plans to ask for more money to boost the sweeping schedule during the county’s upcoming fiscal year 2021 budget deliberations.