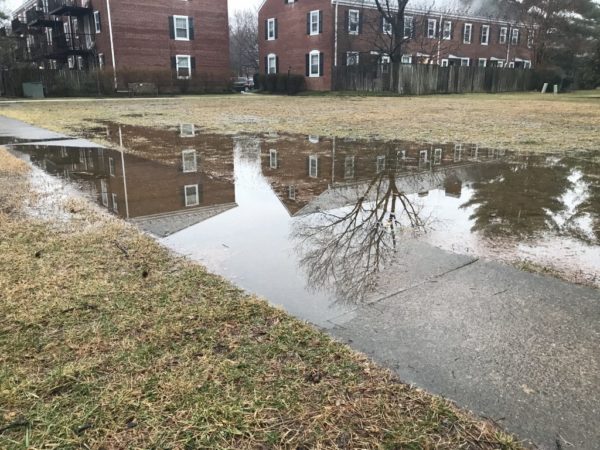 The groundwater level in Arlington is rising, officials say, which could cause more flooded homes and mosquito-filled backyards.

Arlington’s Dept. of Environmental Services says current groundwater levels are an average of 5 feet higher than they were during the past two years. Officials say one reason is last year’s 60-inch rainfall, which broke the 1889 record for the region’s rainiest year ever recorded.

Groundwater in the region is 5 feet higher than it's been in the last two years. Know how to deal with stormwater. https://t.co/MBIrMj9FSd pic.twitter.com/u58w2oV1F9

Whitesell explained that the “void” in soil which usually absorbs water is now filled with water. This mean water can’t be as easily absorbed and it’s more likely to cause runoff and flooding.

The likelihood of flooding will be highest when storms dump an inch or more of rain on the area, she said.

In addition to floods, Whitesell said residents can also expect:

“Water ponding next to your foundation is not something that you want for the long-term structural safety of a home,” said Whitesell. “And certainly if you have a basement nobody wants water getting in there.”

She clarified that rising groundwater levels do not affect floodplain boundaries, which are drawn based on severe, “100-year” floods. However, the DES website notes that county waterways can be hit hard by stormwater runoff which causes:

Rising groundwater levels can also affect the underground vaults that protect controls for utilities like electricity, gas and telephone lines, Whitesell said. When these gather moisture or flood it can pose a risk to equipment and workers as NIOSH has reported.

“Some vaults are very shallow and so may not be affected,” said Whitesell. “But some are deep enough to be affected.”

When asked, Whitesell said the swell of rainstorms could be a symptom of climate change: “One of the effects we expect with global warming and climate change is that wet areas get wetter and dry areas get drier.”

In Arlington, Whitesell said the number of applications to the county’s Stormwater Wise Program that helps homeowners reduce stormwater run-off has doubled over the last year.

“We’re all hoping for a drier year,” she said.

In the meantime, DES recommends residents flood-proof their homes as much as possible and check whether they’re eligible for flood insurance. But in case all else fails the department suggests residents take the following precautions: