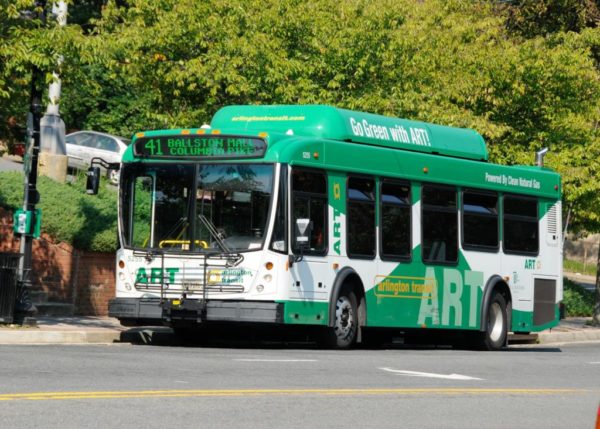 (Updated at 5 p.m.) Some Arlington Transit (ART) riders are out of luck as transportation officials tell ARLnow that maintenance issues are cutting service.

The bus service shared today that ART routes 43, 45, 53, 87 would operate on “reduced service” and that at least three other lines (45 to S. Dinwiddie Street, 61 to N. Veitch Street, and 75 to N. Monroe Street) “will not operate.” The disruptions are due to a “mechanical issue,” according to social media posts.

Numerous delays and cancellations were also reported on Monday.

In October so far, the ART Alert Twitter account reported 76 times that buses missed their routes and 25 times the buses were late or ran reduced schedules. The vast majority of both types of issues were attributed to unspecified mechanical issues.

Due to mechanical issue ART 45 to S. Dinwiddie and Columbia Pike from Rosslyn Metro at 1:00 PM will not operate. We apologize for the inconvenience.

A spokesman for Arlington’s Department of Environmental Services (DES) — which oversees ART — told ARLnow that the service interruptions were not related to the ongoing Metrobus strike in Northern Virginia.

“The recent missed trips are due to bus maintenance issues,” said DES spokesman Eric Balliet. “ART’s service provider, National Express, is working to address these issues as soon as possible.”

“This is a temporary interruption and we are working side-by-side with the County to rectify these delays,” said a spokesman for the U.K.-based National Express Transit Corporation. “We will be back to full-service without reductions within 48-72 hours, and will continue to work with the County on delays that may be caused for any route that we serve.”

This is not the first time that mounting maintenance problems affected ART service.

In January, ART pointed to its bus aging fleet and a shortage of drivers and as reasons why some trips were going “missing.” Last June, ART service was also dogged with service delays and cancellations due to unspecified maintenance issues.

In the past, several buses’ brakes have failed, one bus with a reported check engine light issue overturned, and there were other major crashes. However, it’s not clear whether ART’s the latest maintenance woes are related to any of the past issues.

Back in May, a county survey found riders want more updates about their trips, and a recent study found ridership has continued to decline over the past three years.

Due to Mechanical issues ART 61 to Veitch from N. Veitch st at 4:13 pm will not operate. We apologize for the inconvenience.