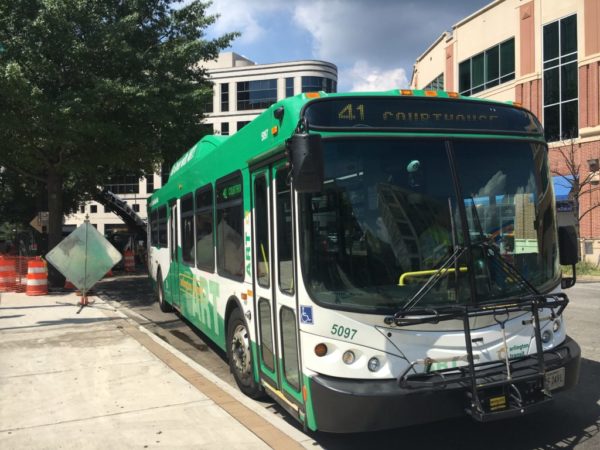 Arlington Transit recorded a 15 percent drop in riders in the fourth quarter of fiscal year 2018, covering April through June, compared to the same period a year ago.

The latest figures forwarded to the Northern Virginia Transportation Commission show that the bus service recorded 745,850 passenger trips over that three month stretch, down from 874,695 a year ago.

That number is actually a 6.6 percent increase from ART’s ridership figures covering January through March. But those numbers were also disappointing ones for the bus service, as they represented a 17 percent drop from the same time period in 2017, meaning that ART has recorded ridership declines for the last two quarters in a row.

The latest ridership statistics represent an even steeper drop still from the same time period in 2016, when ART recorded 905,661 passenger trips — equivalent to a 17.6 percent decline.

These figures come as bus services nationwide cope with ridership declines, as the D.C. region as a whole struggles to convince riders to embrace public transit. The NVTC’s numbers also show that Metrobus ridership in Northern Virginia localities dipped by 9 percent this quarter compared to a year ago, though Metro ridership did tick slightly upward at most Arlington stations.

“The depth of erosion in bus ridership has been more than what we were expecting,” County Board Vice Chair Christian Dorsey previously told ARLnow. “As riders returned to Metro after SafeTrack, we would’ve expected a modest reduction, but it’s just been more substantial than we thought.”

The county has indeed previously blamed some of the decline in bus ridership on riders returning to Metro after the aforementioned intense rehab work, though the rail service has continued to deal with lengthy delays due to construction, which recently resulted in some riders embracing bus options this summer. Other potential culprits include the increasing popularity of ride-sharing or telecommuting.

Dorsey says the county’s approach to reversing that trend will remain the same as ever: “keep investing in places where people want to go.” He added that the county is also working to “refresh” some of its older ART buses, which could help lure riders back to the service.

“We’re investing in new coaches for greater comfort, which is always helpful,” Dorsey said. “When ART was introduced, one of the benefits that convinced people to move to the bus was they were cleaner and quieter. But as they’ve aged, that competitive advantage has declined. We just need to reinvest in ART a little bit.”