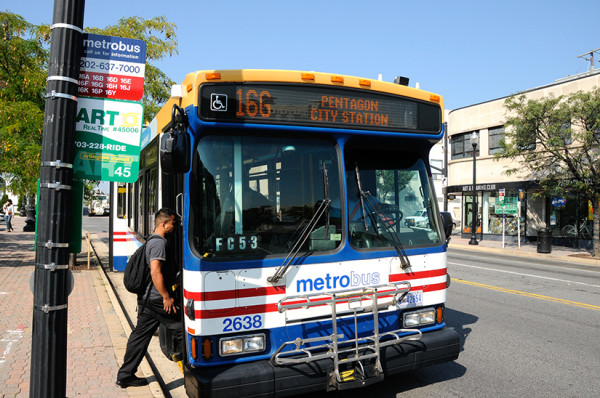 Metro’s dire warnings about the impacts of track work in the latter half of this month seem to have effectively pushed Arlington commuters onto local bus routes instead — though bike share services didn’t see a similar ridership boost.

With the rail service’s major rebuilding work on the Silver, Orange and Blue lines fading in the rearview, Arlington transportation officials say their data show that both Metrobus and Arlington Transit ridership saw substantial jumps during the construction from Aug. 11 through Aug. 26.

Metro itself recorded an 11 percent dip in ridership over that period when compared to figures from 2017, largely attributable to WMATA’s persistent urging that commuters only use rail service if they had “no other option” for the two-week period. And in Arlington, at least, it seems that commuters weren’t shy about turning to bus options instead.

The Metrobus 3Y line, which runs from stops along Lee Highway to D.C.’s Farragut Square, recorded the biggest ridership surge, according to county transportation spokesman Eric Balliet. He says the county’s initial data show a 97 percent increase in average weekday ridership compared to the weeks prior to the track work starting, shooting from an average of 413 riders each day to 815.

He added that Metrobus’ 38B line, running from Ballston to Farragut Square, recorded a 38 percent increase, with average daily ridership jumping from 3,001 people to 4,136. Balliet noted that the county requested that Metro provide additional service along those lines, as they run along the Orange and Silver stops most likely to be affected by the track work.

As for ART buses, Balliet says the 43 route (running between the Crystal City, Rosslyn and Courthouse Metro stations) recorded a 67 percent increase in average weekday riders compared to a year ago. Last August, the bus service saw an average of 1,022 people on those buses each day; this year, it jumped up to 1,706.

Similarly, he said the 42 line between Ballston and the Pentagon saw a 16 percent jump, from last year’s 1,068 riders per day to 1,241. He attributes those changes to the fact those ART lines “parallel the segment of the Blue Line that was closed during the track work.” Metro shut down service on the line between the Arlington National Cemetery stop and the line’s New Carrollton terminus.

Jim Larsen, the county’s commuter services bureau chief, pointed out that those numbers amounted to increases of anywhere from 599 to 1,000 riders each day between the two bus services.

“Now, if we can only keep them,” Larsen said.

The track work did not produce a similar ridership bump for bike-sharing in the county, however.

Compared to the same two-week period a year ago, the number of Capital Bikeshare trips originating in Arlington was “virtually the same, though down just a smidge,” according to Bike Arlington Director Henry Dunbar.

Spokespeople for the ride-sharing companies Uber and Lyft did not respond to requests for comment on any ridership changes they observed during the track work.

Anecdotally, it would seem that the Metro construction inspired some commuters to turn to their cars rather than transit options. For instance, some ARLnow commenters mentioned hefty backups on the Key Bridge and 14th Street Bridge to make it into D.C. in the first place.

In all, 73 percent of the more than 1,400 respondents to an (admittedly unscientific) ARLnow poll on the issue said the Metro track work affected their commutes in some way.

Metro was even scheduled to do a bit more work on the Silver, Orange and Blue lines this weekend, prompting single-tracking through Rosslyn. However, it announced today (Thursday) it’d be abandoning those plans.