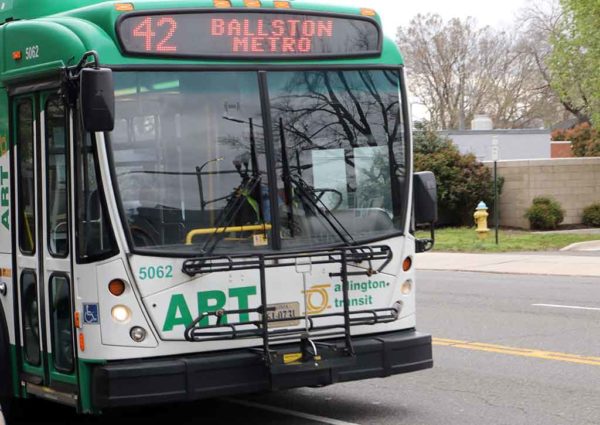 Arlington County’s bus service has recorded a hefty drop in ridership over the course of the last year, according to figures released to regional transportation planners.

In all, Arlington Transit recorded about 696,500 passenger trips in the first three months of 2018. That’s a 17 percent drop from the same time period last year when the service registered more than 836,000 trips, according to a new report from the Northern Virginia Transportation Commission on May 3.

The numbers show riders increasingly turning away from the bus service over the past few months, as the latest ridership figures also represent a 6.2 percent decrease from ART’s numbers in the last three months of 2017.

For context, ART recorded just under 783,200 passenger trips in the first three months of 2016, according to the NVTC’s figures. That means the bus service saw an 11 percent decrease in ridership in the same time period from 2016 to 2018.

Eric Balliet, a spokesman for Arlington’s Department of Environmental Services, which manages ART, wrote in an email that ART officials believe this drop is a result of several factors. Commuters are returning to Metro “now that rail service has stabilized in Northern Virginia,” he said, and increasingly choosing ride-sharing services instead or simply telecommuting more frequently.

“We don’t have a way at this time to quantify each of the above changes,” Balliet wrote.

The Arlington County Board recently voted to cut a pair of bus routes when it passed a new budget, citing a lack of demand from riders. The county is also preparing to shutter several lightly used bus stops along Washington Boulevard, and renovate dozens more.

ART is certainly not the only bus service in the area to see a dip in passengers.

Metrobus service in Northern Virginia has also seen a decline in riders over the last year — NVTC figures show that the service recorded about 4 million passenger trips in the first quarter of 2018, compared to about 4.5 million in the same time period last year. That works out to a decline of roughly 11 percent.

The numbers track closely with a nationwide decline in bus ridership. An analysis by the New York-based TransitCenter advocacy group found that bus ridership fell by 5 percent last year across 35 major metropolitan areas.