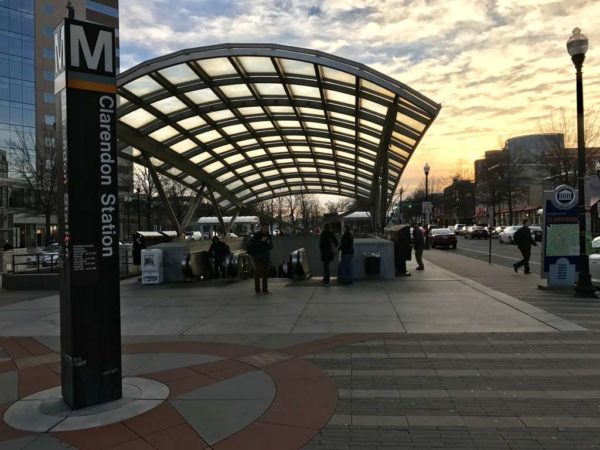 An ARLnow analysis of figures compiled by WMATA and released to the Northern Virginia Transportation Commission shows that ridership at Arlington’s 11 Metro stations fell by about 4.1 percent in the first three months of 2018 when compared to the same time frame last year.

Back in early 2017, WMATA was right in the midst of SafeTrack, with large sections of Metro lines closed temporarily and substantial headways for passengers, even at rush hour. But the ridership numbers suggest that any Arlington riders dissuaded from hopping on Metro during the heavy maintenance work have yet to embrace the rail service once more.

ARLnow’s analysis also shows Metro ridership in the county has dropped by about 13.4 percent compared to the same time frame in 2016, before SafeTrack work began. 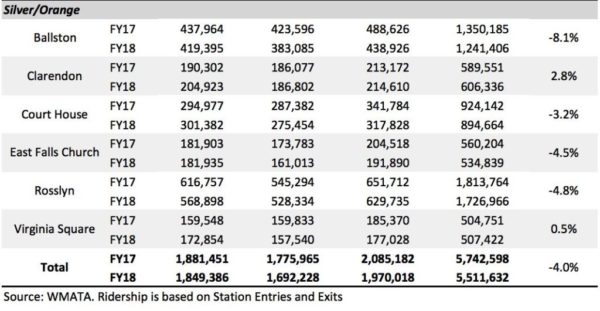 Metro officials and county leaders say they’re not overly disturbed by these numbers, noting that WMATA ridership as a whole only fell by 1 percent when comparing the first three months of this year to 2017. Yet they also acknowledge that other transportation options are steadily luring riders away from Metro, and that these declining ridership numbers may be a symptom of problems in the county beyond WMATA’s woes.

“This really indicates how our transportation network is being disrupted in ways not just associated with Metro,” said Christian Dorsey, the vice chair of the Arlington County Board and a member of the Metro Board of Directors, while adding that “we’re not going to overreact to the numbers we see in one quarter.”

Metro spokeswoman Sherri Ly wrote in an email that ridership in Arlington generally “reflects the ridership trends systemwide.” She says Metro has broadly found that “peak periods are performing less poorly, however off-peak (especially evening) ridership is down much more steeply,” after SafeTrack. 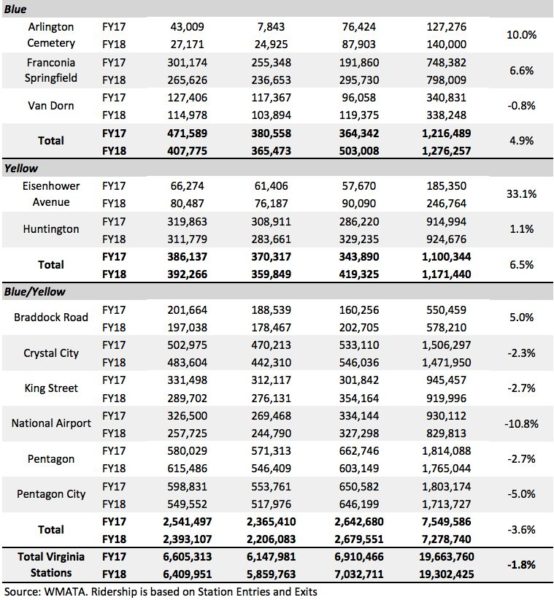 WMATA leaders “are confident that by providing safe, reliable service, Metro can win back riders who may have changed their travel patterns during SafeTrack,” Ly added. Yet she did acknowledge that a handful of different factors have prompted large ridership drops at several Arlington stations this year.

Metro observed one of the largest declines in riders at the Ballston station in the first three months of the year, with a more than 8 percent decline from the same period last year. Ballston also recorded a nearly 20 percent drop in ridership from 2016 to 2018, the largest of any Arlington station over the same time period.

Ly believes that’s largely due to ridership dropping on weekends, “when service is truncated from Wiehle-Reston East to Ballston for track work,” a frequent occurrence for Silver Line riders.

Along the Blue Line, however, there could be more systemic problems.

The station at Reagan National Airport recorded the largest drop of any Arlington location from 2017 to 2018, with a roughly 10.8 percent decrease. Ridership there also declined by 17.5 percent there since 2016, the second largest drop in the county.

Other nearby stations like Crystal City and Pentagon City also have recorded large drops since 2016, to the tune of 12.9 percent and 13.8 percent, respectively.

Ly believes SafeTrack encouraged riders along the Blue and Yellow lines in the area to “permanently switch to Metroway, other local buses and [Virginia Railway Express], where ridership on these routes have stayed up post-SafeTrack.”

But Arlington officials believe their trouble attracting, and keeping, businesses in Crystal City has also contributed to the problem.

Dorsey agrees that “underemployment” in the area is cause for concern for county leaders — Arlington’s falling tax revenues are due in no small part to problems building up the commercial property tax base, after all. Cristol even floated the possibility of revisiting the area’s sector plan to have a better county framework for solving this particular problem.

But Dorsey stressed that simply bringing more business to Crystal City won’t address all of Metro’s problems, as he feels the “station-to-station dynamics don’t tell the larger narrative of Metro, per se.”

“Some of the overall circumstances surrounding ride-sharing, the increasing use of telework… it’s causing a lot of churn,” Dorsey said.

Ly believes companies like Uber and Lyft are “negatively impacting ridership, especially during off-peak times,” when maintenance work is most likely to cause long headways.

That’s why Dorsey believes following the course outlined by Metro General Manager Paul Wiedefeld, and putting a special focus on improving WMATA’s infrastructure, is the surest path to getting the system back on track. Metro will have an extra $500 million in dedicated annual funding from Virginia, Maryland and D.C. to work with, after all, and Dorsey is willing to be patient to see what that money means for WMATA.

“We know making Metro incredibly safe, easy to find and attractive once you’ve gotten there, are the things you need to do to attract riders,” Dorsey said. “Not everybody has come back yet, but we’re working on it.”