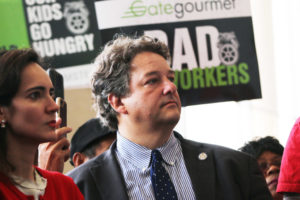 Last week, we asked the two candidates in the 49th District House of Delegates race to write a 750 word essay on why our readers should vote for them in the Nov. 5 general election.

Here is the unedited response from the Democratic incumbent Del. Alfonso Lopez.

When I was first elected to the Virginia House of Delegates, I pledged to be a champion for the Arlington values that have made our community such a welcoming place for people from all over the world. I also pledged to fight to improve our public schools, increase transportation/transit funding, expand health care, address issues of social and economic justice, and protect our environment.

Standing with my House Democratic colleagues, I’m proud to say I’ve kept my promises to you.

Over just the last two years, we’ve fought to end the school-to-prison pipeline by limiting long-term school suspensions, increased teachers’ salaries by 5%, secured a dedicated source of revenue for the Metro system, worked to address criminal justice reform, renewed the Green Jobs Tax Credit, and–perhaps most importantly– expanded Medicaid to almost 400,000 Virginians across the state, including 5,600 of our neighbors in the 49th District.

I believe in a Commonwealth that lifts everyone up and leaves no one behind.

As your Delegate, I’ve been a champion for our values in Richmond and I’m proud of the work I’ve done to find common ground and get things accomplished.  Along those lines, I’ve worked to build coalitions of legislators, advocates, and activists in order to pass bills that move Virginia forward. In fact, since 2012, I’ve been the Patron, Co-Patron or Chief Co-Patron of 115 bills signed into law–49 of which were bipartisan efforts. Among other things, these bills include laws strengthening tenant protections, improving small business procurement, expanding healthcare to immigrant mothers and children, protecting passports and military IDs from identity theft, and incentivizing the use of solar and other renewable energy sources across Virginia.

As our community continues to grow, many of our neighbors have concerns about the impact that growth will have on housing. Indeed, housing is becoming more and more expensive–preventing many young people from becoming homeowners and leading to fears that lower-income residents are being pushed out of communities they may have lived in for decades.

Addressing our region’s housing affordability crisis has always been one of my top priorities as Delegate. In 2013, the General Assembly passed my bill creating the Virginia Affordable Housing Trust Fund (VHTF)–an important tool used by the state to provide funding to projects dedicated to preserving and building affordable housing, as well as addressing homelessness. In the years since its creation, the VHTF has already helped create housing for thousands of Virginians–including hundreds of families in the 49thDistrict.

I’m proud of that progress, but it’s clear that we need to do much more to properly address this issue–not just in Northern Virginia, but in towns, cities, and rural areas across the Commonwealth. I am fully committed to this fight and will not rest until our state is investing the resources we need.

I believe we need to invest in our infrastructure, and in our workforce, and, most of all, in our children. Going forward we must focus on jobs and the economy, education, and the needs of working families. I pledge to continue fighting for better schools, long-term transportation solutions, environmental safeguards, small businesses, economic development, and the Arlington values of embracing diversity, tolerance, and compassion that we all hold dear.

On November 5th, every seat in the General Assembly is up for election and, for the first time, Virginians have the opportunity to send a progressive Democratic legislature to Richmond. We are on the cusp of electing a General Assembly that will finally act on sensible gun violence prevention measures, protect a woman’s right to choose, ratify the Equal Rights Amendment, and properly fund our schools.

Make sure you have a plan to vote on Tuesday! Then call up a friend or family member and make sure that they have a plan, too. Working together, I know we can create a community and a Commonwealth that lifts everyone up and leaves no one behind.

My name is Alfonso Lopez and I ask for your support and VOTE on Election Day, Tuesday, November 5th. www.AlfonsoLopez.org

END_OF_DOCUMENT_TOKEN_TO_BE_REPLACED

More Stories
Legal Insider: What is a Whistleblower?Arthur Purves: Why You Should Vote for Me