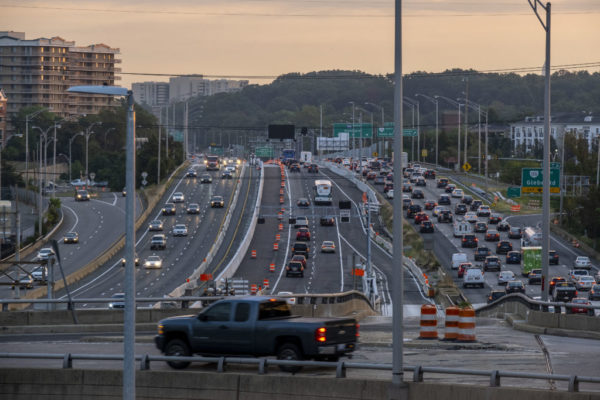 The time has come for big change for local commuters: after two years of work, the I-395 HOV lanes inside the Beltway are becoming express toll lanes later this month.

The switch over is slated to take place on Sunday, Nov. 17.

Among the changes of which drivers should take note:

The tolls will offer “busy drivers a convenient new choice,” will help reduce traffic in the regular lanes of I-395, and will generate $15 million annually for transit projects, according to toll lane operator Transurban.

More from a press release, below after the jump.

The 395 HOV lanes are set to open as dynamically tolled express lanes on the night of Sunday, November 17, pending weather and on-road crew activities.

For final preparation, the 395 HOV lanes will close the evening of Friday, November 15. With safety as the priority, the Express Lanes team is preparing drivers for the changes.

Here’s what drivers need to know before hitting the road

Tips to stay safe on the road

Drivers can get an E-ZPass® by signing up online, calling 877-762-7824, or in-person from E-ZPass® Customer Service Centers or E-ZPass® On-the-Go retail locations.  Still have questions?  Head to the Express Lanes website for more information on E-ZPass® and E-ZPass® Flex. […]

Once the Lanes are open, pricing will be available on overhead signs. Updates about any on-road issues will be shared via Twitter (@VAExpressLanes).