It’s a season not unlike the harvest: you can have a feeling for when it’s going to start, but never really know for sure until you’re in it.

The revelry is just as real though, and, quite literally, intoxicating. I’m speaking today of Stoutmas, the nebulous holiday season that my wife and I invented some years back and has kicked off in earnest this week.

You may or may not be surprised to learn that ours isn’t the most religious of houses, but Stoutmas (or #Stoutmas if you’re on social media, because if anything else can get a day, surely we can get a whole season for Stouts) has become one of our few observed high holidays (along with Halloween, Dia del los Muertos, our “leave us alone” Christmas Day wherein we’ve already done our family stuff the day before and stay in being lazy, new Bojack episodes — though I guess we’re gonna have to find something to replace that one…).

It started a few years ago and has become a beloved tradition not just for us, but now for many of our clients at Arrowine.

Stoutmas began during my first stint at Arrowine, as we were heading into the fall rush and holiday season. Occasionally, breweries give buyers like me samples of upcoming releases to try, and periodically, I find my fridge bursting a bit at the seams with beers I haven’t quite gotten to yet for one reason or another.

With an impressive collection of Stouts and Porters built up, and sharing a love of dark beers of all strengths and styles, my wife and I decided to start opening and splitting at least one of them per night. We got to try many things new, either to her or to both of us, and freed up precious refrigerator space for stuff like, you know, food.

Soon enough we realized that as November rolled into December, there were more than enough Stouts coming out that we really could do a different one every night leading into the Christmas holiday. Hence, Stoutmas. 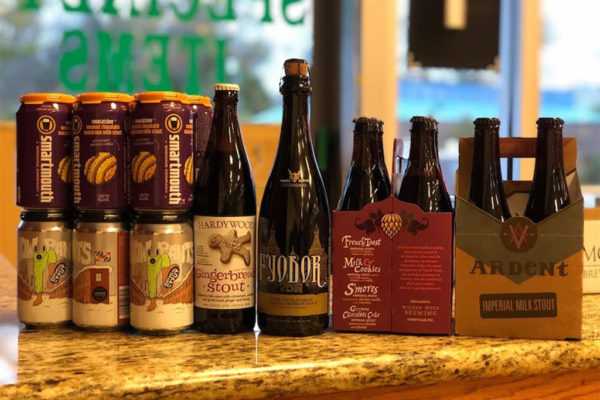 This year’s Stoutmas is kicking off with the release of Hardywood’s Gingerbread Stout, First of Its Name and Hearald of the Vaunted Variant Releases. But, by the time you find this column online, I’ll also have rich, bold, dark Stouts in stock from Union, Oliver, Wicked Weed, Stillwater, Southern Tier, Smartmouth and Schalfly with many more to come. Wicked Weed’s entry is seemingly made for Stoutmas: a 4-pack with one bottle each of four of their fan-favorite Imperial Stouts (Milk & Cookies, French Toast, S’mores and German Chocolate Cake).

Stoutmas is best celebrated with friends and/or family; those Imperials can add up quickly. You can hold off until December 1 and do the advent calendar thing, but I like to think Stoutmas lives in our heart and livers all year round.

There’s truly no wrong way to celebrate the season. So go forth, and indulge that curiosity about that Imperial Stout you’ve always wanted to try, and maybe, just maybe, we’ll find that the real Stoutmas was the friends we made along the way.

Next time: The “interesting” column I promised last time — I hope.