Every year, the DC region spends over half a million dollars on the Street Smart safety campaign. With pedestrian fatalities reaching their highest levels in decades, that budget is a resource we need to be maximizing to improve safety outcomes.

Instead, the campaign seems more concerned with watered-down messages that won’t offend anyone and visual gimmicks that catch your eye and jog your memory – but don’t actually send a useful message.

You’ve probably seen these ads before. For years it was tired faces, lately it’s shattered lives. The evocative imagery is great for getting you to remember that you’ve seen these ads, but doesn’t necessarily help you take away any sort of useful message from them. 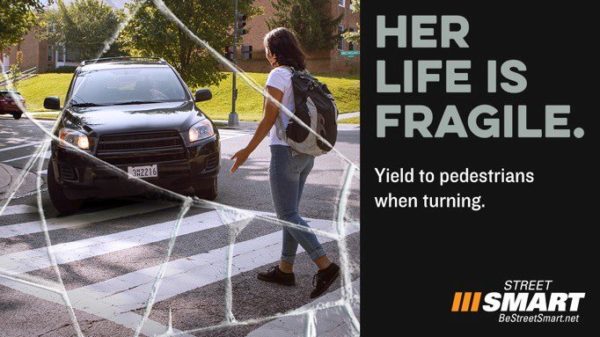 The results are pretty abysmal, especially amongst drivers – those whose behavior is most likely to harm another individual. Only 13% of drivers surveyed could even remember seeing a Street Smart ad. The after-campaign survey either doesn’t try to determine if the “messages” of the campaign are getting through, or the results are so bad they don’t include them in the report.

The survey does highlight a remarkable amount of self-reported lawlessness and dangerous behavior – in the prior week alone, 23% reported that they have failed to stop for a pedestrian in a crosswalk, 60% reported speeding in a 30 mph zone.

The worst part of all of this as that there is actually a lot of important things that need to be said about traffic safety. We have new infrastructure on our roads that didn’t exist when most drivers on the road today were learning. Street Smart could be teaching people about Rectangular Rapid Flashing Beacons and HAWK signals, about Bike Boxes and Protected Intersections.

Additionally, Street Smart could be actually informing us instead of admonishing us. We all know we should slow down; we should look, we should give cyclists some space on the road. Is being told one more time really going to push someone over the edge to start behaving? Or would it be more effective to explain HOW speeding contributes to crashes, or why they’re more likely to hit a pedestrian while they’re making a left turn than if they’re making a right turn?

Finally, Street Smart needs to keep the focus where it can do the most good – on the behavior of those mostly like to harm others: drivers.

Yes, safety is a shared responsibility, yes there are things that everyone can do that can help a bit here and there, but you lose credibility with cyclists and pedestrians when you’re admonishing them to “be visible” and “be predictable” and “wear reflective clothing” while drivers regularly crash into stationary, well-lit and reflective objects. No amount of high-vis or carefulness can save you from a single distracted or careless driver – to say otherwise can quickly devolve into victim blaming.

Thankfully, Street Smart has gotten better about this over the last few years. And thankfully – the latest campaigns are a considerable step up from warning pedestrians “If you text, you’re next” or “don’t be caught dead wearing black.”

Read more →
More Stories
Could Amazon and JBG Smith Light the Way for the Future of Arlington’s Dark Fiber Network?County Board Expected to Fund New Set of Neighborhood Projects