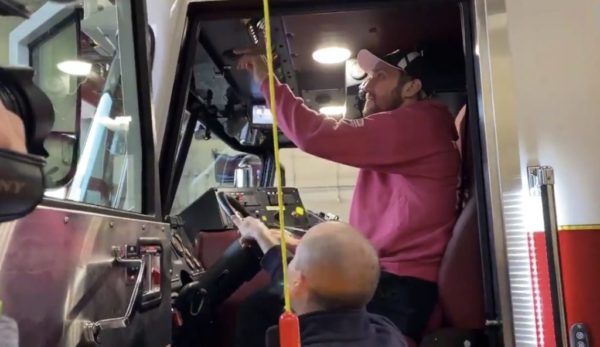 The surprise visit happened Thursday afternoon at Fire Station 2, near Ballston, where the Caps practice. Ovechkin can be seen in a video (below) dropping off pizzas and taking a brief tour of the station and ACFD’s Truck 106.

(The truck often runs calls in the City of Falls Church, which contracts with Arlington to provide fire services.)

“Yeah!” Ovechkin can be heard saying as he sits in the driver’s seat, with the truck’s lights blinking. “Everybody’s going to be afraid of me on the road.”

“We love station visits,” ACFD said in a Tweet shortly after the visit. “This one though… TOP! Thanks for dropping by @ovi8. Come by anytime!”

Station 2 had a surprise visitor today! Big thank you to @capitals , @aleksandrovechkinofficial & @papajohns_dmv for stopping by & bringing this afternoon. Always proud to #RockTheRed #ALLCAPS ‬