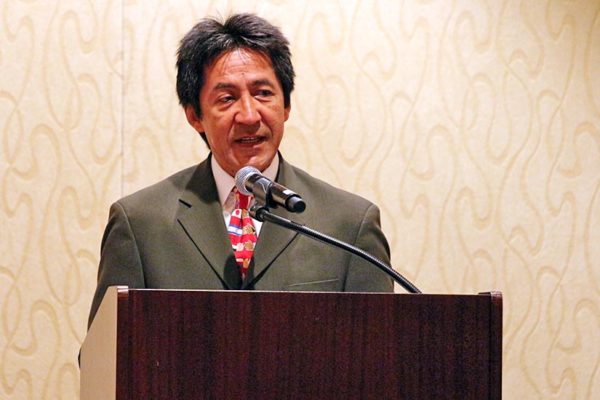 Arlington County has announced the recipients of its 21st annual James B. Hunter Human Rights Award, an honor given each year to individuals, community groups, non-profit organizations and businesses that promote diversity and equal rights in the county.

This year, three individuals and three community groups were honored and a new category for the award was established: educators. A ceremony to honor the award winners will take place on Thursday, December 12 from 7-9 p.m. in the Bozman Government Center (2100 Clarendon Blvd).

Tejada served on the County Board from 2003 to 2015. Following his retirement from the Board, he was appointed to the Metropolitan Washington Airports Authority Board of Directors by former Virginia Gov. Terry McAuliffe.

During his time on the Board, Tejada served as an “unapologetic progressive” and an advocate for diversity, affordable housing, and Latino issues.

“He was instrumental in establishing the Office of the Public Defender, the Arlington Non-Profit Assistance Center, and the Community Volunteer Network,” the county said in a press release.

Mulholland, a local civil rights activist, took part in sit-ins and demonstrations that took place around Arlington from June 9-23, 1960. Throughout the decade, she also participated in the Freedom Rides, the March on Washington, and the Selma to Montgomery March, among others. After protesting in Mississippi in 1961, she was jailed and housed on death row for nearly three months.

“The James B. Hunter Award recognizes those in our community who champion the rights of underrepresented people,” said County Board Chair Christian Dorsey in a press release. “My colleagues and I are grateful to the Human Rights Commission for honoring these individuals and organizations, who have worked tirelessly to ensure Arlington is safe and welcoming for everyone.”

Find the full press release is below, after the jump:

Arlington County has announced the winners of its 21st annual James B. Hunter Human Rights Award, which honors individuals, community groups, non-profit organizations, educators and businesses that promote human rights and demonstrate a commitment to and outstanding accomplishment in promoting cultural diversity and equal rights for all residents.

The award, first given in 1999, is named for former County Board member James B. Hunter, who dedicated many years of his life to helping under-served groups access government services designed to protect their rights.

This year’s winners include three individuals and three community groups. For the first time, the Human Rights Commission established a new category for the Award: educators. The County Board will honor the winners at a ceremony and reception from 7-9 p.m., Thursday, Dec. 12, in the County Board Room at the Bozman Government Center (2100 Clarendon Blvd.). The winners will be presented by the Arlington County Human Rights Commission.

A reception honoring the winners will begin at 7 p.m. and the formal ceremony will follow immediately after at 7:30 p.m. The public is welcome to attend.

“The James B. Hunter Award recognizes those in our community who champion the rights of underrepresented people,” said County Board Chair Christian Dorsey. “My colleagues and I are grateful to the Human Rights Commission for honoring these individuals and organizations, who have worked tirelessly to ensure Arlington is safe and welcoming for everyone.”

Walter Tejada served on the Arlington County Board from 2003 to 2015. Born in El Salvador, Tejada moved to the United States at 13, and he has committed himself to enhancing Arlington’s diversity and community voice. He was instrumental in establishing the Office of the Public Defender, the Arlington Non-Profit Assistance Center, and the Community Volunteer Network. Tejada has served on county, state and regional boards, including as the first Chairman of the Virginia Latino Advisory Commission and on the Board of Directors of the national Latino civil rights and advocacy organization, UnidosUS. In 2015, Tejada became the founding president of the Virginia Latino Leaders Council.

A life-long Arlingtonian and educator, Mulholland became well known in the 1960s for her work in the Civil Rights Movement. By the time she was 23, she had participated in more than 50 sit-ins and demonstrations, including the Freedom Rides, the Jackson Woolworth’s Sit-in, the March on Washington, the Meredith March and the Selma to Montgomery March. An arrest during her work in Mississippi resulted in her incarceration, where she was housed on death row for nearly three months. Her work also landed her on the Ku Klux Klan’s most wanted list. Locally, she took part in sit-ins at numerous Arlington lunch counters, kneel-ins at churches, demonstrations at Glen Echo Park and organized a protest inside the White House.

While only in high school, Sean Bender-Prouty is a Human Rights Campaign Youth Ambassador and has sat for two years on the Youth Council of Gender Spectrum, an organization working to create inclusive environments for all youth. Bender-Prouty was the first openly LGBTQ middle school student in Arlington when they came out as transgender in 2015, and they helped start LGBTeen Magazine for LGBTQ teenagers in 2017. In 2018, they were the first openly transgender page in the Virginia Senate and spoke on a panel about non-binary identities at the 2018 Time to THRIVE Youth Conference.

Black Parents of Arlington (BPA) works to improve the lives and education of black children in Arlington by eliminating race-based discrimination and implicit and explicit bias and ensuring the health and well-being of all children in Arlington, regardless of race or ethnicity. This past year, BPA compiled data about disparities between black and white students in Arlington Public Schools and sought to highlight the systemic inequalities causing these disparities. BPA proposed solutions for mandatory implicit bias training for teachers, hiring more teachers of color, closing achievement or opportunity gaps, and addressing discipline disparities.

The Arlington League of Women Voters (LWV) is a nonpartisan organization that is committed to producing positive change in Arlington, with a focus on three major issues: voter registration, voter education and gerrymandering/fair redistricting. This year, the organization teamed with the local DREAM Project to support local DREAMers and DACA recipients and applicants. Arlington LWV also sponsored Voter Registration for People with Disabilities Week with the ENDependence Center of Northern Virginia and partnered with Challenging Racism, an Arlington nonprofit, and Virginia Humanities for an interactive program on the Federal Housing Administration’s discriminatory practices in denying loans to Black homebuyers before the enactment of the Fair Housing Act.

The Ethiopian Community Development Council (ECDC) was established in 1983 as a non-profit, community-based organization to serve the growing Ethiopian community. ECDC serves refugees and immigrants from diverse cultural backgrounds while maintaining a focus on African newcomers. ECDC has a unique combination of experience as a direct service provider, a national voluntary agency, and advocate committed to empowering newcomers to become self-sufficient and active participants in their communities. It runs a national refugee resettlement program authorized by the U.S. State Department and manages the African Community Center in DC, which facilitates many of the direct service programs. Since its inception, ECDC has served more than 135,000 people.