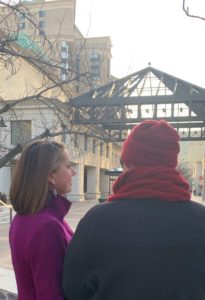 Progressive Voice is a biweekly column. The views expressed are solely the authors’.

By Tara Teaford and Dana Milburn

As mothers, our priorities center on our children’s health, well-being, happiness, and yes — definitely — their safety. As progressives, we support measures to promote those rights for everyone, everywhere.

Every day in America, 100 people are shot and killed, four of them children. We are fortunate to live in Arlington, a community with relatively little gun violence, but we are no more immune than Newtown, Las Vegas, Jersey City, Virginia Beach and many other American communities were when they were shattered by gun massacres. Arlington has experienced several shootings in the past year. And our neighbors in D.C. experience almost daily gun violence partly because Virginia’s lax gun laws help enable that violence via the “Iron Pipeline,” with guns trafficked up and down the I-95 corridor.

Now, finally having elected a Democratic majority in the House of Delegates, Senate and governorship, Virginia has an historic opportunity to make all Virginians safer. We gratefully support the Arlington delegation’s plans to help make real change happen in the upcoming session of the General Assembly.

We expect the bills introduced this January in Richmond to be very similar to those proposed for the July 9, 2019, Special Session on gun violence prevention, which the then-Republican majority ended without action. These and other potential legislation are designed to work together to address the gun violence crisis for Virginians:

Preventing gun violence is one of the morally defining issues of our time. We add our voices to the chorus of Americans and Virginians calling for common sense gun legislation for all Americans. We urge fellow Arlingtonians and lawmakers from across the state — from all parties — to support the passage of new life-saving laws in Richmond.