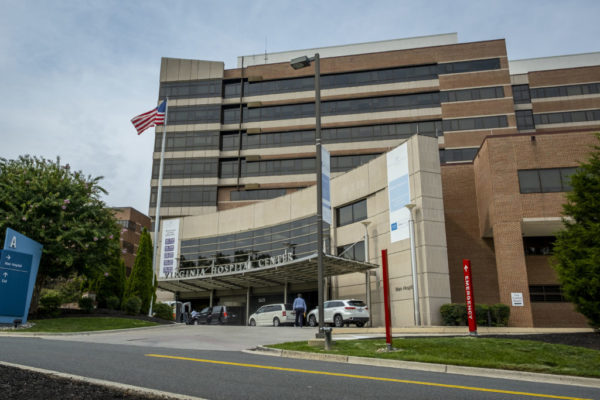 Trauma operations took effect Monday morning. The official Level II designation that VHC is working towards indicates that the Arlington hospital is equipped to handle serious trauma cases — everything from falls to crashes to gunshot wounds — with properly-trained staff (including board-certified trauma surgeons) and necessary equipment on hand 24 hours a day.

“Becoming a Level II Trauma Center is a rigorous process that must be approved by the Commonwealth of Virginia,” a PR rep for the hospital added. “Virginia Hospital Center is partnering with George Washington University Medical Faculty Associates (MFA), OrthoVirginia and Arlington County Fire & EMS in this key initiative… It is projected that the Hospital will be able to provide care close to home for about 1,000 trauma patients a year, who otherwise would have had to be transported greater distances to other hospitals.”

In the past, patients with serious traumatic injuries in Arlington were typically rushed to Inova Fairfax Hospital or George Washington University Hospital, even though VHC was often closer. In 2016, for instance, a woman struck and seriously injured by a driver just blocks from the hospital was brought via ambulance to Inova Fairfax.

Now, however, most trauma patients will be brought to Virginia Hospital Center, cutting down on transport times.

Anne Marsh, EMS Chief for the Arlington County Fire Department, said “for the first couple of months” unstable, multi-system trauma patients — the most dire cases — will continue to be brought to GW or Inova Fairfax, as part of a “soft roll out.”

Most other patients — except those closer to the other hospitals (in Rosslyn, for instance) — will be brought to Virginia Hospital Center. The first such patient was transported by Arlington County medics to VHC on Monday morning, Marsh said.

“We’re excited because it’s a great resource to have within Arlington,” said Marsh. “Our transport times in Arlington are very, very low — around 5 minutes in most cases — and the fact that we can respond within our time frames… is very exciting and very advantageous to Arlington County as a community.”

Shorter transport times to the hospital won’t just benefit patients in need of care, it will also benefit paramedics. Rather than a longer trip out to Fairfax County or Foggy Bottom, Arlington County EMS units will now be able to stay within the county to transport patients and restock supplies, reducing downtime.

Marsh noted that ACFD personnel have been training in coordination with the hospital and that the department and VHC “have worked really closely together” on the new trauma operations.

“It’s been a long while,” Marsh said of the years-long effort to provide trauma care within Arlington County.

In November hospital officials told the Washington Business Journal that they expect to break even, financially, on its additional trauma capabilities.

“It’s worth it to do it for the community, and it adds some credibility to the great work that we do here,” the hospital’s Chief Nursing Officer told the Business Journal.

END_OF_DOCUMENT_TOKEN_TO_BE_REPLACED

More Stories
Arlington Ranks as No. 3 Place for Working from HomeArlington Pet of the Week: Archimedes