Arlington County Police say they’ve identified three suspects in a string of car break-ins and thefts around the county. 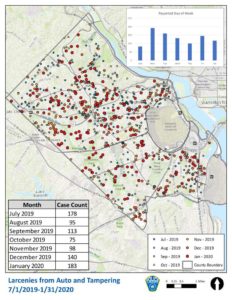 Since July, according to a new ACPD press release, 882 cars have been broken into — and that’s only counting those that have been reported to police. A map of the break-ins show reports from all parts of the county, and a ramp-up in reports since the beginning of December.

Savage says the thefts — which include both larcenies of items from inside cars and thefts of the cars themselves — are crimes of opportunity, most often involving thieves breaking into vehicles by testing door handles and finding those that are unlocked.

Rumors on Nextdoor and local listservs of thieves using sophisticated electronic means to break into cars have not been proven by ACPD or other nearby police departments, she said.

“We don’t have any evidence to support that,” said Savage. To reach that conclusion, police have reviewed surveillance footage and conducted interviews with suspects, she noted.

Police are continuing to conduct public outreach to encourage residents to lock their doors at night, remove keys and valuables from their parked cars, and report suspicious activity. The outreach includes nightly reminders on social media and electronic signboards, currently posted on Lee Highway near I-66 and on Glebe Road near Route 50.

While not in response to any current pattern of calls to police, according to Savage, ACPD is also reminding residents to only report suspicious activity, without regard to a person’s race or ethnicity.

“Factors such as race, ethnicity, national origin, or religious affiliation alone are not suspicious,” the police press release says. “The public should report only suspicious behavior and situations rather than beliefs, thoughts, ideas or expressions.”

The Arlington County Police Department is announcing numerous charges have been sought against suspects responsible for multiple auto theft and larceny cases throughout the County. This week, 11 warrants were obtained for Michael A. Brunner III, 18, of Washington, D.C. His charges include felony Stolen Auto, Grand Larceny and Credit Card Larceny, as well as misdemeanor Vehicle Trespassing and Petit Larceny. The Department also recently sought petitions for two juvenile suspects for Grand Larceny Auto.

The identification and apprehension of these suspects is just one step in reducing crimes of opportunity in Arlington County. Thieves are looking for easy, low effort opportunities to steal from hardworking members of the public. Reported incidents indicate that thieves often target multiple unlocked vehicles parked on streets, in driveways and in garages to rummage through personal property and steal items of value as well as vehicles with keys left inside. To help residents keep their vehicles and property safe, the Arlington County Police Department is sharing ways we can work together to reduce and prevent property crimes in our community.

Larcenies from auto are often crimes of opportunity with thieves taking advantage of unsecured doors and windows to steal items left unattended or out in plain view. Based on surveillance video, witness accounts, interviews with victims and interviews with suspects apprehended in past cases, the evidence suggests that the suspect(s) are trying door handles and entering those vehicles that are found to be unlocked. Arlington County Police, as well as our regional law enforcement partners, do not have any confirmed cases in which thieves have entered vehicles using sophisticated electronic technology.

When and Where Thefts Occur

Larcenies from auto have been reported in nearly all neighborhoods across Arlington County, typically during the overnight hours and can occur on any day of the week. Suspects will often commit a series of larcenies from auto by targeting numerous vehicles at a time.

The Department is deploying electronic signboards in various locations throughout the County as a high-visibility community reminder to lock vehicles and safeguard personal property. The signboards are part of a public awareness campaign and will be periodically moved to different neighborhoods to help spread important crime prevention messaging. A signboard deployed in your neighborhood doesn’t necessarily mean that larcenies from auto have been reported in the area.

Close and lock all windows and doors when you park. Pull on the door handle to verify it’s locked.
Keep your garage door closed and locked. If a thief can get into a vehicle, they can have access to a garage door opener and can gain access to your home.

Arlington County Police officers proactively patrol Arlington’s neighborhoods to identify and prevent criminal activity. The department’s efforts are enhanced by the active involvement of residents. When residents call to report suspicious activity, they aid not only the police, but help make their neighborhoods a safer place to live and work.

Factors such as race, ethnicity, national origin, or religious affiliation alone are not suspicious. The public should report only suspicious behavior and situations rather than beliefs, thoughts, ideas or expressions.

Residents observing suspicious activity should contact the Emergency Communications Center at 703-558-2222. If you see a suspect in your vehicle, do not approach them and dial 9-1-1 immediately.