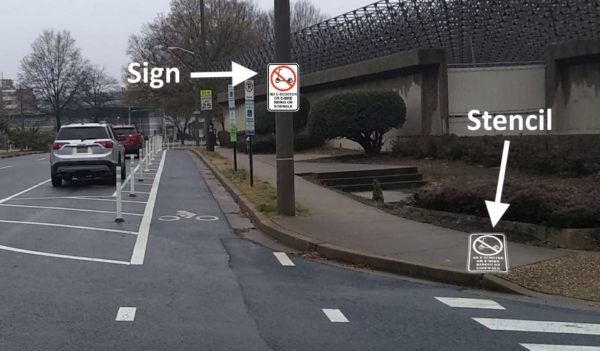 By the end of the month, Arlington County will start posting signs making it clear where e-scooters and e-bikes are not welcome.

The county today revealed that the sidewalks along nine different stretches of road, in six Arlington neighborhoods, will be off-limit to scooters and similar personal mobility devices. That follows the November passage of an ordinance allowing e-scooter and e-bike operation in the county, following a temporary pilot program.

The new no-go zone for scooters and the like, deemed “key sidewalk conflict areas,” are:

“Later this month, new signage prohibiting sidewalk-riding will be installed next to protected bicycle lanes, where people biking are separated from drivers with a parking lane or other physical barrier,” Arlington County said in a press release. “When a protected bike lane is available in the same direction of travel, shared e-scooter and e-bike riders must use it instead of the sidewalk.”

“Signage will be placed at the start of a sidewalk where sidewalk-riding is banned,” the press release said. “Initial enforcement of the new restrictions will focus on education and warnings.”

The county is now evaluating other stretches of sidewalk that are not next to protected bike lanes for possible scooter prohibition, “in the interest of public safety and welfare.”

Arlington has set up a website — ridedockless.com — that lists information about e-scooter and e-bike riding in the county, including rules, parking etiquette and info for businesses.