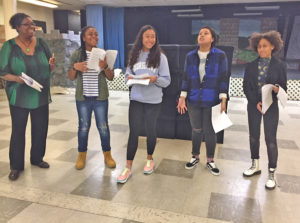 While various panels and programs have explored racism in Arlington, dozens of students recently took a different tack, using site visits, interviews with community members, and creative drama to “Flip the Script.”

About 10 student actors — both black and white — interviewed local and academic historians and visited African-American communities before returning to their rehearsal space to devise a historically based play, “The Day Nothing Happened.” The stories they heard resonated with these young actors and compelled them to confront the difficult issues that African-American students still experience today.

During one visit to Arlington’s Hall’s Hill neighborhood, the students were astonished that a wall had been built in the 1930s to physically separate the African-American community from surrounding white neighborhoods, as if hidden from a society uncomfortable with our mere existence. The response of the students was of hurt, anger and disbelief. A portion of that wall still stands today as a reminder of the past injustices and present inequalities.

The play is structured around one day in 1959 when four black teenagers entered an all-white school for the first time in Virginia, with scenes and interactions from “on the bus, homeroom and cafeteria.” Parents’ concerns were woven in, too, such as a scene from the night before the four entered school.

Performances of the drama made powerful impressions on some in the audience. Claudine Bostick Sangaré, parent of one of the actors, said, “I recently witnessed an elderly black man, visibly moved and crying during the show.” She also recounted a Latina woman’s shock at learning Stratford Junior High (now known as Dorothy Hamm Middle School), located in her “backyard,” was that first school in Virginia to desegregate long ago.

Sangaré said her own 14-year-old daughter drew parallels to the experiences of her character in the play — one of the four black teenagers — and her current school environment. “Since her involvement with ‘Flip the Script,’ my teenage child had to become emotionally attached to the history to channel feelings of angst, anxiety and fear to portray her character.”

In the creative process leading to the drama, actors and others reflected on what they had heard and learned. “I have definitely gone through a roller coaster of emotions,” said one actor. “I was nervous to be vulnerable and raw, but ultimately excited to shed light on a story that is often swept under the rug.”

This effort to examine and promote African-American voices through drama was guided and produced by Encore Stage & Studio, a non-profit acting company that works with students in summer and after school. Once Virginia Humanities gave Encore the green light for the project, we reached out to neighboring high schools in Arlington calling on activists, actors and historians.

The cast performed select scenes at Arlington’s MLK Tribute, “Prayers of a King,” on January 19. In the audience was Sonia Rosen, who said, “As a member of a multiracial Jewish family, imagine my glee hearing one of the African-American girls in the play greet a white girl in the cafeteria with ‘Shalom!’ And then…to see a conversation about ‘not all Jews are white,’ and ‘you’d know that if you spent time in our community.’ I just about jumped out of my seat, ‘Yes, yes!'”

In contrast to the “once-a-year” type commemorations during Black History Month, “Flip the Script” will continue past one point in time. We are working to connect this to the formal curriculum in some way throughout the year. And “Flip the Script” has already has performed at Kennedy Center Millennium Stage in Washington, DC.

As I worked backstage, I knew that we had touched a nerve and created a spark. The question that I asked myself is what will we (all those who have heard) do with this information? Will it be a call to action? As time marches forward, and our memories begin to fade, our passion to sound the alarm against inequality may decrease each day. The walls that separate and divide can rise quickly if we do nothing. Let’s continue to work together as a community to find creative solutions to fight racism where you live.