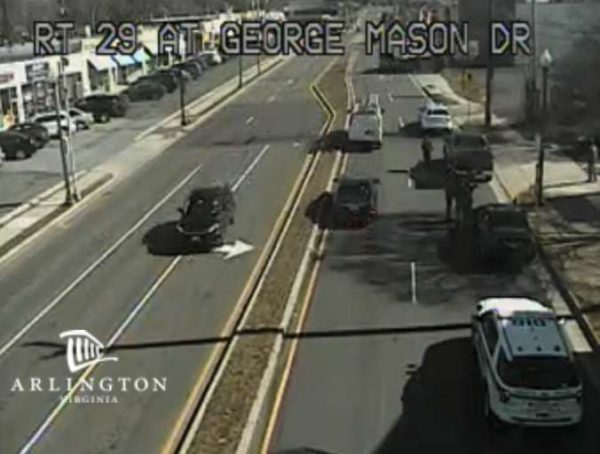 A 69-year-old Alexandria man is facing a felony charge after police say a minor, two-vehicle crash led to a physical altercation along Lee Highway.

The crash happened shortly before noon this past Friday — Valentine’s Day — near the intersection of Lee Highway and N. George Mason Drive. In its aftermath, numerous people called police to report a physical fight in the street.

Police responded and determined that one of the drivers punched a window on the other car several times, then “produced a knife and allegedly attempted to strike the victim,” according to Arlington County Police. The suspect was arrested and charged with Attempted Malicious Wounding.

ATTEMPTED MALICIOUS WOUNDING, 2020-02140133, N. George Mason Drive at Lee Highway. At approximately 11:40 a.m. on February 14, police were dispatched to the report of a fight. Upon arrival, it was determined that the victim and suspect were involved in a minor vehicle crash when the suspect began yelling obscenities towards the victim. The suspect then pulled his vehicle in front of the victim’s vehicle, exited and approached the victim. The suspect struck the victim’s window multiple times with a closed fist. The victim attempted to push the suspect away by opening his door, however, the suspect produced a knife and allegedly attempted to strike the victim. The victim was not injured. Ralph Graham, 69, of Alexandria, Va., was arrested and charged with Attempted Malicious Wounding.

ARLnow posted about the incident on Twitter at the time:

ACPD is out with two drivers who were reported to be physically fighting in the street. One lane of EB Lee Highway is blocked at George Mason Drive. pic.twitter.com/at0fmx5Me3