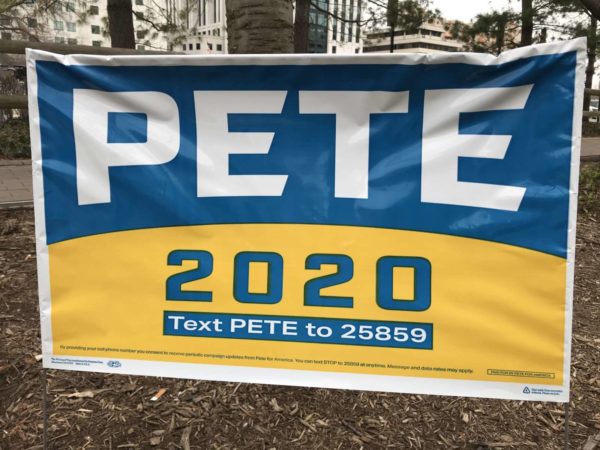 (Updated at 6:10 p.m.) Pete Buttigieg, Democratic candidate for president and former mayor of South Bend, Indiana, is making another appearance in Arlington — and this time it won’t be in a resident’s backyard.

The event is being held this coming Sunday, Feb 23, from 3:45-5:15 p.m. It’s taking place ahead of the March 3 Super Tuesday primary in Virginia, and after last week’s Elizabeth Warren campaign event at Arlington’s Wakefield High School.

Buttigieg’s last known campaign appearance in Arlington was a private fundraiser at a Waverly Hills home this past June.

State Sen. Adam Ebbin, who endorsed the mayor’s presidential candidacy early in the race, sent the following email to supporters about the event:

On Sunday, February 23rd from 3:45 to 5:15 Mayor Pete Buttigieg will be holding a town hall in Arlington, at a location to be announced.

Throughout my political career I have had the opportunity to work with only a handful of candidates who simultaneously embody pragmatic progressive reform, and possess both the strong commitment to our nation formed by service, as well as the ability to bring Americans from all walks of life together with the common purpose of ensuring that future generations will be better off than their parents.

Mayor Buttigieg embodies these qualities, and has outlined a plan to address gun violence, advance and support communities of color, and build a [resilient] path forward for America.