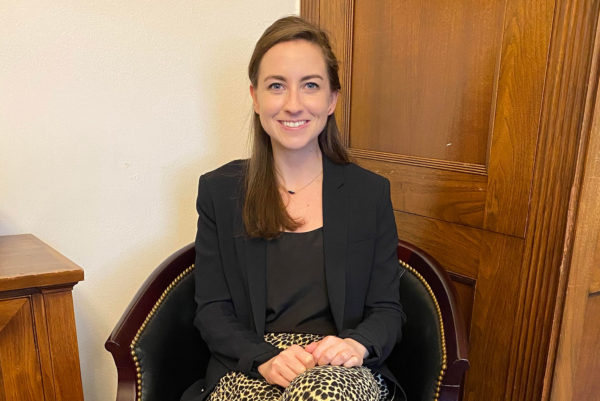 A lot has changed for Grace Rubinger, an Arlington native who has been working for Rep. Don Beyer (D-Va.) since she graduated college.

Rubinger started her career as an intern in Rep. Beyer’s office the fall after she graduated from Elon University in 2016, just before President Trump was elected. Four years later, she is now a legislative assistant to the congressman, working behind the scenes in various policy areas Rep. Beyer is passionate about.

She recently began taking on more responsibility in specific issue areas. Currently, she is handling the congressman’s work on the House Committee on Science, Space, and Technology.

“When we’re in session there will be any given number of hearings for that committee during the week,” Rubinger told ARLnow.
“I’ll spend my time preparing for [the hearings], reading the background materials and witness testimonies and then coming up with questions that I’d like for the congressman to ask the witnesses.”

Rubinger also advises the congressman when deciding which bills he should support.

Rubinger’s interest in politics goes back to her upbringing near Cherrydale, where she attended Taylor Elementary and Williamsburg Middle School. Politics was always right across the Potomac River, she said, and at home her parents were in tune with current events. There would often be a nightly discussion of the news at the dinner table.

Her interest in policy, however, was shaped at Elon. In her senior year, Rubinger wrote a thesis on the intersection between the Catholic Church’s view on birth control and the women’s movement.

“Writing that thesis and figuring out my own views was the turning point for me,” Rubinger said.

Rubinger’s tenure at Rep. Beyer’s office has come at a unique time in history. Her work as an intern began prior to the 2016 election, and has stretched into what is now the third presidential impeachment trial in American history — an impeachment process her boss has been particularly vocal about.

“It is interesting to look back and see how many things have changed,” said Rubinger.

“The one thing that I’ve noticed just in my different capacities in the office is just how much more engaged people are,” she said. “People are so outraged all the time about different things that are going on and I think [public engagement] is probably the one bright spot in everything that’s going on. People are reading the news more and staying more engaged and calling us and writing us more.”

“That is something that might have been missing beforehand,” she added.