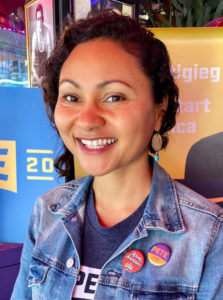 Brenda Eribo on Pete Buttigieg: Americans of all stripes have more in common than not. Pete Buttigieg’s empathy, character and service orientation tap into what unites us on big important issues. In Iowa, he came in first among healthcare and climate change issue voters because his progressive policies balance ambition with the possibility of realistically being effectuated.

Conscious of generational impact, Pete asks not only “is it bold enough” but also “can it be paid for responsibly.” It’s why his ambitious healthcare reform is a fraction of the cost of others and his Douglass Plan to dismantle systemic racism is the boldest, most comprehensive out there!

Most Americans support a version of the pragmatic progressive reforms Pete proposes on climate, healthcare, education, labor, immigration, guns, infrastructure, racial justice, national security, global leadership, and the economy. Being audacious yet sensible will expand our coalition and help down-ballot Democratic candidates change the balance in Congress. Onward together!

A longtime Arlington resident, Brenda Eribo has recently been devoting most of her free time to volunteering for Democratic candidates at the expense of more frequent walks along Four Mile Run Trail and nurturing her community garden plot. Embracing her West African and Eastern European roots and interest in social justice, Brenda serves as national founder of Theta Nu Xi Multicultural Sorority, Inc. and is actively involved in the VA for Pete grassroots organization. 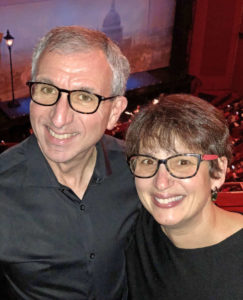 Debbie and Sam Kirzner on Amy Klobuchar: We support Amy Klobuchar to be the next President of the United States. Amy is experienced with an established track record of getting things done and working across the aisle. She holds the record in sponsoring bills that have been enacted, dwarfing that of her competitors. And, she wins. She wins in the Midwest and in rural districts.  She had record turnout. She is wildly popular in Minnesota, a state that Trump almost won.

Other candidates focus on far-left ideas that are widely unpopular and unaffordable. This is a must-win election. Amy will have wide appeal in the general election, with support from Democrats, independents and disaffected Republicans.

Let’s nominate someone who will win.

Debbie and Sam Kirzner are both retired and very active with Arlington Democrats and volunteer with several local cultural institutions. 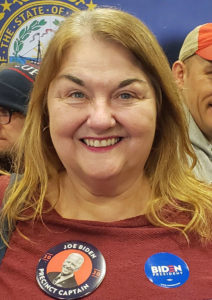 Carole Lieber on Joe Biden: On the campaign trail, people shared they voted for Joe because they know and trust him. Joe connects personally. He speaks with everyone at an event. He listens, he relates. His volunteers and staff reflect our diversity. An African American staffer shared “He knows us, he grew up with us, he is us.” He has humble roots; at a young age his father lost his job, his family had to move to find work. As a young man he lost his wife and daughter in a car accident, soon raising two young boys as a single dad and dealing with mounting hospital bills. He later worried as his son Beau served our country bravely overseas, later mourning his death from cancer. Voters relate to these struggles. Joe will restore the soul of our nation. He models our democratic values, we can trust him, and he can beat Trump. Vote Joe!

Carole Lieber lives in South Arlington and is a community organizer and grassroots activist. She is a former President of Arlington Heights Civic Association, delegate to the Arlington County Civic Federation, appointed Human Rights Commissioner, and volunteer with multiple community organizations. 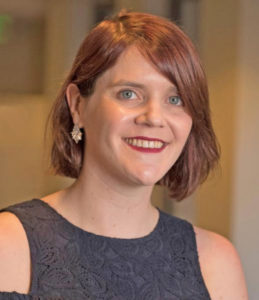 Maggie Davis on Elizabeth Warren: Dream Big, Fight Hard. Sen. Elizabeth Warren’s rallying cry for Democrats speaks to both her philosophy of leadership and tenacity as a campaigner. A progressive with a strong record of transforming big policy ideas into reality, Sen. Warren has both the vision to inspire voters and the skills to effectuate change within the existing systems of Washington.

She spoke truth to power while building the Consumer Financial Protection Bureau. Engaging with voters in hours long selfie lines following her campaign rallies, she has touched voters of all walks of life and their stories have informed her numerous policy proposals. A clear anti-corruption leader, she directly contrasts the rampant corruption within the Trump Administration. With an eye toward defeating Donald Trump in November, we need a Democratic candidate that unites the party and inspires the Democratic base to turn out to vote for them. Sen. Warren is that candidate.

Originally from Ohio, Maggie Davis has called Arlington her home since 2013. An attorney by training, she works as an emergency management law and policy analyst and is an active Arlington Democrat. 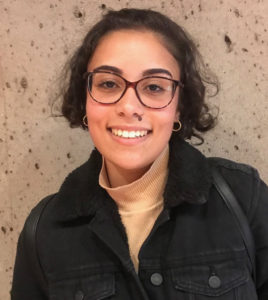 Zeinab El-Rewini on Bernie Sanders: Too often, members of the Democratic Party have abandoned the people of this country – and of other countries – to appease the interests of wealthy donors, large corporations, and war profiteers. Bernie Sanders is a different kind of Democratic politician – one who consistently takes the just position, no matter the political cost.

No other candidate’s platform is more beneficial for working-class folks than Bernie’s, which includes a firm commitment to a single-payer healthcare system, debt-free public college, and medical/student loan debt cancellation. And no other candidate has the massive, diverse, grassroots volunteer army that helped Bernie win in Iowa and New Hampshire.

Yes, Bernie is an old white man. So what? His policies are more uplifting to young people, minorities, and women than those of any other candidate.

Zeinab El-Rewini is a recent graduate of the University of North Dakota. Soon after moving to Arlington, she began volunteering with the Bernie Sanders presidential campaign.