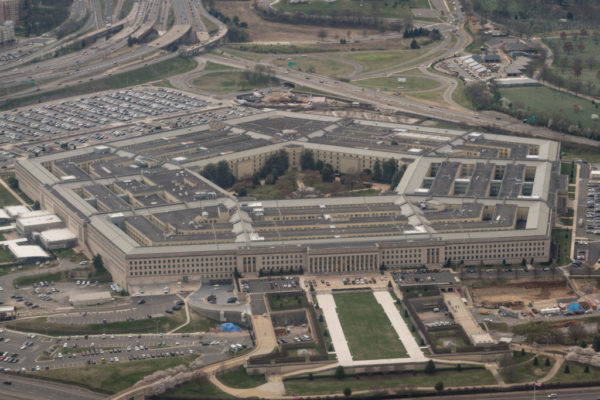 (Updated at 3:30 p.m.) A 19-year-old man from Arkansas has been charged with trying to blow up a car in the Pentagon parking lot Monday morning.

Federal prosecutors say the suspect, Matthew Richardson, tried to blow up a Land Rover, parked in the Pentagon North Parking lot, by sticking a piece of fabric in the gas tank and lighting it on fire. The vehicle did not explode and the suspect took off running after being confronted by a Pentagon police officer.

An Arkansas man will make his initial appearance in federal court at 2 p.m. today on charges relating to his alleged attempt at blowing up a vehicle at the Pentagon yesterday.

According to court documents, Matthew Dmitri Richardson, 19, of Fayetteville, was discovered in the Pentagon North Parking lot yesterday morning by a Pentagon Police Officer on patrol. The officer allegedly observed Richardson standing next to a vehicle striking a cigarette lighter to a piece of fabric that was inserted into the vehicle’s gas tank.

According to court documents, after a search of Richardson, officers allegedly discovered a cigarette lighter, gloves, and court documents related to Richardson’s arrest on or about February 22 for two counts of felony assault on a law enforcement officer in Arlington County.

According to court documents, the owner of the vehicle is an active duty servicemember and does not know Richardson.

Richardson was arrested yesterday and is charged with maliciously attempting to damage and destroy by means of fire, a vehicle used in and affecting interstate and foreign commerce. If convicted, he faces a mandatory minimum of five years in prison and a maximum penalty of 20 years in prison. Actual sentences for federal crimes are typically less than the maximum penalties. A federal district court judge will determine any sentence after taking into account the U.S. Sentencing Guidelines and other statutory factors.

Arlington County Police assisted federal police agencies in the search for the man on Monday.

Arlington officers were dispatched to the area around Arlington National Cemetery around 11 a.m. to look for a man who, according to initial reports, might have intended to light himself on fire. They were joined by Pentagon police, Fort Myer police and U.S. Park Police in searching for the man.

According to ACPD spokeswoman Ashley Savage, Arlington police assisted with maintaining a perimeter around the search area and brought a K-9 officer to help with the search.

The U.S. Park Police Eagle 1 helicopter also hovered overhead during the manhunt, looking for the individual throughout the sprawling cemetery grounds and amid throngs of visitors. He was finally apprehended around 12:15 p.m. by Pentagon police near Arlington House, the one-time home of Confederate Gen. Robert E. Lee.

Richardson was arrested this past weekend in Arlington and charged with felony assault on a law enforcement officer, according to prosecutors. Savage said he was arrested by a different police agency, not Arlington County Police. Richardson was previously arrested on theft charges in Arkansas in November.

END_OF_DOCUMENT_TOKEN_TO_BE_REPLACED

More Stories
TRAFFIC ALERT: WB Route 50 Blocked by CrashPlan for Nonprofit to Take Over Reeves Farmhouse to Go to County Board