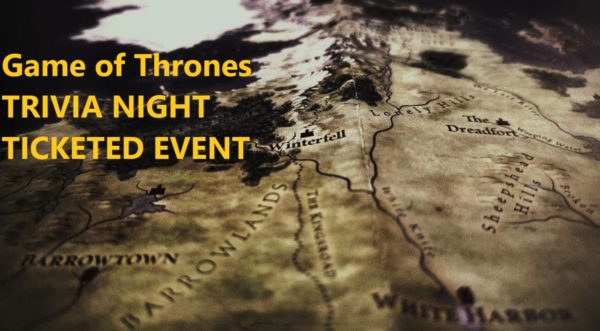 Game of Thrones may not be coming back this spring, but a Shirlington bar is giving locals a last chance to use their Westeros trivia before purging the final few seasons from memory.

On Friday, Feb. 28, fans of the HBO series can test their trivia against others at Dudley’s Sport and Ale (2766 S. Arlington Mill Drive) from 7-9:30 in a tournament sponsored by Pour House Trivia.

The event is listed at “ticketed” but the tickets are free reservations available online. According to an event posting:

Teams can be from 1 to 7 people. One ticket per team. So just one person from each team needs to get a ticket for your team.

Due to the popularity of this event — it is a ticketed event with reserve seating.

The event page noted that teams must be checked in no later than 6:45 p.m.

It isn’t the first Game of Thrones event at the bar, which according to the Facebook page hosted watch parties for the episodes.

Photo via Dudley’s Sport and Ale/Facebook