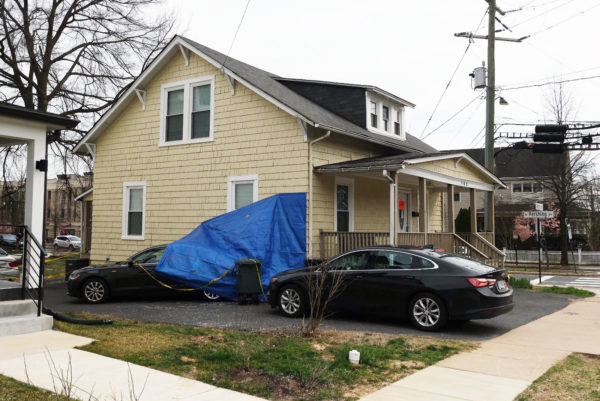 (Updated at 4:25 p.m.) The driver of a landscaping truck, accused of ramming at least three vehicles, a bus stop and a house in Lyon Park earlier this week, is now facing criminal charges.

Arlington County Police say 33-year-old Jose Gomez of Gaithersburg, Maryland was arrested and charged with Driving Under the Influence and Driving with Open Container of Alcohol after Monday’s incident on N. Barton Street.

At approximately 3:29 p.m. on March 2, police responded to the 700 block of N. Barton Street for the report of a vehicle crash with property damage. Upon arrival, it was determined that the driver of the striking vehicle allegedly hit a parked vehicle, overcorrected and then drove through a bus stop, a County light pole, metal trash container, and into two parked vehicles. The force of the impact sent one of the parked vehicles into a residence, causing structural damage. The driver of the striking vehicle remained on scene. Officers administered field sobriety tests and executed a warrant for a blood draw. Jose Manuel Carranza Gomez, 33, of Gaithersburg, MD was arrested and charged with Driving Under the Influence and Driving with Open Container of Alcohol.

The crashes destroyed the bus stop near N. Pershing Drive and, we’re told, might have caused foundation damage to the house, prompting a building inspector to place a large, orange sticker on the door.

Today a blue tarp covered the spot where a car was pushed partially into the house.

A short video of part of the incident, shared with ARLnow, shows the truck backing up onto the sidewalk and then pulling forward again, as residents yell at the driver to stop.