(Updated at 11:15 a.m.) Dating can be awkward, but Northside Social in Clarendon seems to ease anxiety when it comes to the search for love.

While the Arlington eatery doesn’t go out of its way to promote the location as an ideal date spot, it may be the epicenter of local dating activity.

From coffee to wine to food like vegan pastries and gluten-free scones, the spot has a wide range of offerings throughout the day to suit various needs, preferences or cravings. That makes it a pretty safe bet for a first or second date.

Northside offers an “easy, approachable and comfortable” environment, Northside Social’s Wine Director Karin Logan told ARLnow. “None of the staff are particularly overbearing, which can I know can be difficult with a first, second or even third date atmosphere.”

“I don’t think I have a single friend who hasn’t been to at least one of our restaurants on a date,” said Logan, referencing Northside’s sister restaurants of Liberty Tavern and Lyon Hall in Clarendon. She said she sees plenty of first dates and can often recognize first-time meetups driven by apps like Tinder or Bumble.

Apart from app-driven dates, there are also some honest-to-goodness meet cutes happening at Northside. Logan can recall instances where people have ended up meeting potential partners there.

“All of the regulars I know have at least met one or two people there because of its a welcoming place and all of my regulars are friends with one another,” Logan said. “It’s conducive to meeting people.”

Over the two years that Logan has held her position, she said she’s also witnessed at least five or six engagement photoshoots at Northside, which is more than any other restaurant she has worked for during her 18 years in the restaurant industry.

“And those just happened to be the days I was working,” she added. 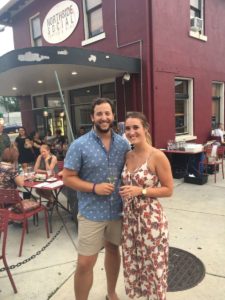 There have been actual engagements as well. Arlington resident Kayla Laubach was at a Friday happy hour at Don Tito in July of 2017 when she received a text from her boyfriend Nick, asking her to stop by Northside Social, a block away.

Confused, she agreed and walked up the stairs into the wine bar to find Nick with candles scattered throughout the room and a bottle of champagne on a single stand-up table.

“It was really cute,” she said. “I was so focused going up the stairs I didn’t even notice they had a little chalkboard sign that said ‘Congrats Kayla and Nick.'”

Shortly after, all of the couple’s family and friends gathered in the space to celebrate their engagement with an after-party. The venue was chosen because Northside was where Kayla and Nick would meet while she was living in Arlington and he was living in Maryland, earlier in their relationship.

Kayla, a regular, says she chose it because she knew Nick would love the sausage and poached egg breakfast sandwich.

“When we were in Arlington we would go there every Saturday and Sunday. It was crazy how often we went there,” she said. “It was the place we fell in love.”

Northside Social has plenty of competition among newer Clarendon area coffee shops like East West Coffee and Wine and This Is Fine Coffee. But Logan doesn’t seem concerned for the future of the hangout. It’s hard to duplicate the community that has formed around a place like Northside — and special features like the dog-friendly outdoor patio and charcuterie boards done just so don’t hurt either.

As for people looking for a place with fewer first dates, there’s always the newer Northside Social in Falls Church, which opened in 2018.