Peter’s Take is a biweekly opinion column. The views expressed are solely the author’s.

Despite over five years of multiple contacts with County government, residents in the Arlington Forest and Bluemont neighborhoods are justifiably frustrated by the County’s lack of progress in protecting pedestrians crossing Carlin Springs Road.

The County has failed these neighborhoods in two respects. First, it has failed to take the decisive actions needed to protect pedestrians at several dangerous intersections. Second, it has failed to give sufficient weight to the views and knowledge of neighborhood associations and residents who offered highly relevant on-the-ground observations, surveys, and data.

For years, residents have been collecting their own survey data and examples of children and families being struck or nearly struck by vehicles.

Neighbors see a number of ingredients that contribute to dangerous risks for pedestrians including: 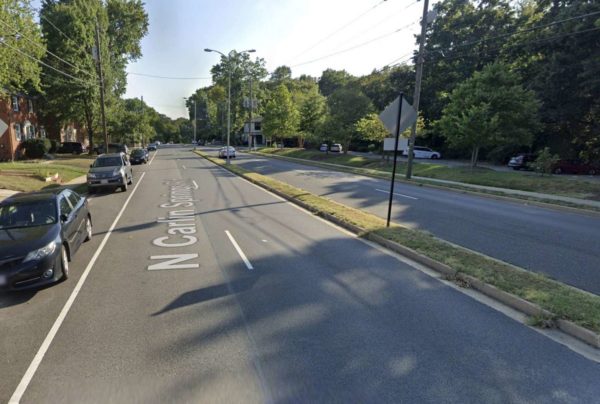 In 2016, the Arlington Forest Citizens Association (AFCA) President spoke to the County Board about pedestrian safety concerns from Ballston to Route 50. At that time, former Board member John Vihstadt was assigned as the Board liaison to AFCA.

In 2016 and 2017, AFCA sent letters detailing accounts of children and families nearly getting struck by oncoming traffic. For example, Lara Doyle witnessed a pedestrian near-miss incident she described as a Kenmore Middle School student dodging cars — like the video game Frogger — while attempting to cross the road as yellow pedestrian lights were flashing. The Arlington Forest and Bluemont Civic Associations have formed pedestrian safety committees and have 40+ pages of emails, meeting notes, and formal letters documenting their direct engagement activity with the County.

In the summer of 2018, ARLnow reported on an accident in which a neighbor was struck by a vehicle while commuting to Metro. Neighbors at the time voiced public concerns:

“Yet [Lora] Strine says the area lacks clearly marked crosswalks or traffic calming measures to slow drivers, particularly on such a wide road, and she can’t understand why it’s taken the county so long to address the issue. ‘This accident is not really an accident,” Strine told ARLnow. “It’s really been years in the making.”

Eric Larsen, the accident victim, advocated before the County Board in a statement urging the County to protect pedestrians.

New pedestrian and traffic safety engagement efforts dubbed Vision Zero introduced by the County are adding to the frustrations felt by Carlin Springs Road neighbors. Yet another new process for civic engagement could bear fruit eventually, but it is no substitute for the long-past-due actions needed along Carlin Springs Road.

Residents are concerned that the current County Board is focused on promoting safety improvements in the Rosslyn to Ballston corridor — while long-time residential neighborhoods like Arlington Forest are left clamoring for attention with no results.

By failing to take decisive actions on the neighbors’ long-standing requests, County government has sent a message that the goals of reducing traffic and increasing sustainability will not apply on Carlin Springs Road.

What should be done now