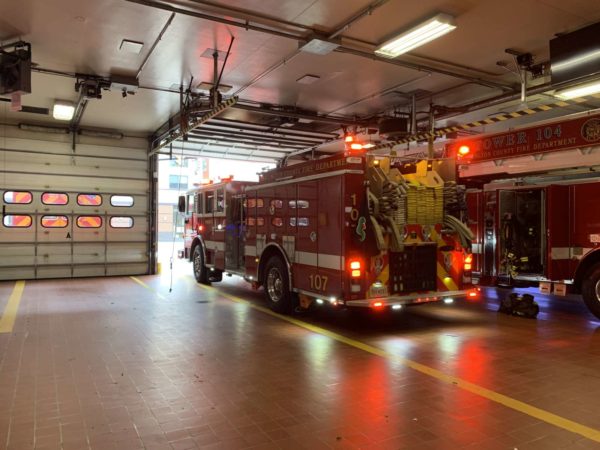 (Updated at 5 p.m.) An Arlington firefighter has tested positive for the coronavirus, a fire department spokesman confirms to ARLnow.

Officials are not revealing the fire station at which the firefighter worked, citing privacy concerns. The spokesman told ARLnow that the county’s health department has notified people the firefighter might have come into contact with, but ACFD personnel who worked with him or her are staying on the job.

Tirelli said that the fire department has plans in place, dating back to the 2009 H1N1 outbreak, for how to keep staffing levels up even if more firefighters start falling ill. Those plans include shifting trained firefighters from department staff jobs to the field, and calling in volunteers if needed.

“We’ll flex and move our staffing as needed,” he said, noting that there are also “high level” discussions for how to maintain fire department staffing as a region.

Across the river, eight members of D.C. Fire and EMS have tested positive for COVID-19 and, as of Sunday, 118 firefighters were under self-quarantine.

ACFD says it has prepared for the outbreak and has protective gear for firefighters responding to illness calls. Still, the department has been urging people who are feeling ill to contact their medical provider and only call 911 in the event of a life-threatening emergency.

There has thus far been only “a very small” increase in calls for people experiencing flu-like symptoms, Tirelli said, but ACFD expects such calls to increase significantly in the coming weeks.

One change that is being made in procedure is reducing the number of personnel who make initial contact with those reporting flu-like symptoms. Instead of a full crew assessing the patient, now a smaller assessment team will go in while others stay back, prepared to assist as needed, according to Tirelli.

As of noon today there were 36 known coronavirus cases in Arlington County, and 290 cases statewide, according to the Virginia Dept. of Health.

Patients with #COVID19 have reportedly had mild to severe respiratory illness. Symptoms include fever, cough, or shortness of breath. Learn more about COVID-19 symptoms: https://t.co/398X3CGPWx. pic.twitter.com/yC9T2D52EE

END_OF_DOCUMENT_TOKEN_TO_BE_REPLACED

More Stories
The Right Note: Getting Through ThisWorkers Keeping the Power on and the Water Flowing During Coronavirus Crisis