Four weeks after the first COVID-19 case was reported in Virginia, the Commonwealth has passed the 2,000 mark.

On Friday morning the Virginia Dept. of Health reported 2,012 cases, 312 hospitalizations, 46 deaths and 19,005 tests administered. Fifteen of the deaths were in Northern Virginia. 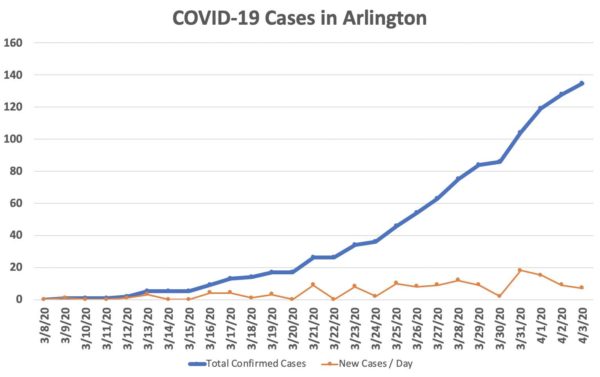 Arlington County, meanwhile, now has 135 known cases, more than double the 63 cases reported one week prior. It’s unclear whether a deceleration in Arlington’s case growth over the past few days will hold.

While Arlington’s total cases remains the second-highest in the state, Arlington has the fourth-highest number of cases per capita, according to the Virginia Public Access Project.

Across Arlington, social distancing and the economic fallout of the lockdown continue to take a toll. But the human spirit can be found on display in many corners of the county, including in a largely shuttered Pentagon City hotel, as seen in this recent Reddit post.

“[The] DoubleTree hotel is empty, and so they are just sending love to the community in this difficult time,” a tipster told ARLnow.

Spotted on my way to work at 5am. Doubletree off 395 from washingtondc